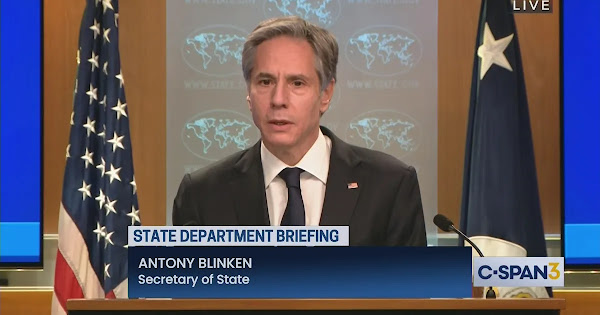 Daily Mail: BREAKING NEWS: Secretary of State Antony Blinken says the U.S. is willing to meet Iran for face-to-face talks on returning to nuclear deal abandoned by Donald Trump
* State Department says the U.S. will accept invitation to join nuclear talks involving European powers who reached Iran deal * President Biden said he plans to rejoin talks after Donald Trump pulled the U.S. out of the agreement * Secretary of State Antony Blinken met with counterparts * Deal was negotiated under President Obama and involved five permanent UN Security Council members plus Germany
The Biden administration says it's ready to join talks with Iran and world powers to discuss a return to the 2015 nuclear deal.
The U.S. will accept an invitation to join talks and discuss 'a diplomatic way forward' with Iran, the State Department said. The State Department said the U.S. would accept an invitation from the European Union to attend a meeting of the participants in the original agreement.
Read more ….
WNU Editor: On the one hand President Biden will not talk to long-time U.S. ally Saudi Prince Salman. But on the other hand he is more than willing to talk to the mullahs of Iran who have a long history of vowing to destroy Israel and the U.S..
Does this make sense to you?
Update: It looks like President Biden is already caving in to Iran's demands that sanctions must be removed …. Biden withdraws Trump's restoration of UN sanctions on Iran (AP). More here …. U.S. rescinds Trump White House claim that all U.N. sanctions had been reimposed on Iran (Reuters)
More News On The Biden Administration Formally Announces It Is Ready To Resume Iran Nuclear Deal Talks
Biden repudiates Trump on Iran, ready for talks on nuke deal — AP U.S. says ready for talks with Iran to revive nuclear deal — Reuters US says it is ready to join talks with Iran, Europe to restore nuclear deal — France 24Iran nuclear deal: US agrees to join talks brokered by EU — The Guardian Biden Administration Formally Offers to Restart Nuclear Talks With Iran — New York Times US says it is willing to sit down for talks with Iran and other nations on nuclear deal — CNN Biden administration open to restarting nuclear talks with Iran — The HillIran nuclear deal: US agrees to meet Iran, world powers in first step for Biden administration — USA Today Biden Administration Ready to Meet With Iran — US News and World ReportOriginal Article