Curt Crandall, Chairman of the Allegany County Board of Legislators, will not Seek Re-election in 2022 -CORRECTED 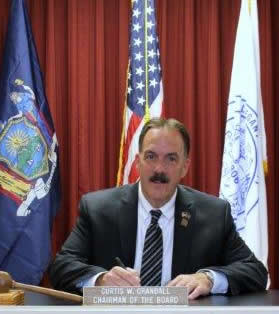 The decision not to seek re-election as a Legislator for the Allegany County Board of Legislators for the term beginning January 1, 2022, does not come without a great deal of thought and mixed emotions. With this year’s early election process, the decision to seek another term comes early in the year, designating petitions need to be filled out and ready for distribution by the end of February, and that is why I chose to make the announcement at this time.

I have been honored to serve as an elected official for more than 30 years beginning as a Councilman for the Town of Caneadea, and serving the past 20 years as an Allegany County Legislator, with the last 16 years as Chairman of the Board. I have been blessed to serve with many County Legislators over the years who were willing and able to create and take advantage of opportunities and at the same time were not afraid to take on and overcome obstacles.

It appears that the majority of the current Allegany County Board of Legislators will be seeking re-election for 2022. This creates a situation where the time is right for me to exit the position as a County Legislator knowing that a very capable Board can continue doing what is right for Allegany County. We also have in place an extremely capable Administrative Team overseeing the day-to-day operations. I am grateful for the dedicated Department Heads and employees that have been part of our Allegany County workforce since I began as a Legislator in 2000, and what we have accomplished together.

Together as a team, we were able to turn the finances around for Allegany County, address our facility needs, reduce the average property tax rate for the last 10 years, expand our development efforts, and so much more. For now, I have the rest of this year to serve the people that have elected me and put their trust in me, and I pledge to do my best to fulfill my obligation as County Legislator and Chairman of the Allegany County Board of Legislators.

This was a press release and an editorial comment was removed upon request. The only this posted was the press release.