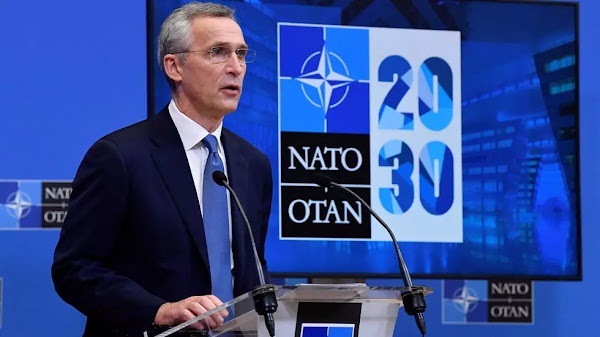 NATO Secretary General Jens Stoltenberg addresses a news conference at NATO headquarters in Brussels, Belgium February 17, 2021. REUTERS – POOL
France 24: NATO chief rejects early military pullout from Afghanistan
NATO Secretary-General Jens Stoltenberg said Wednesday that the military alliance will only leave Afghanistan when security conditions allow, as a deadline for withdrawing troops set out in a peace deal with the Taliban nears.
NATO has just under 10,000 troops in the war-ravaged country helping to train and advise the Afghan security forces.
Most of them are not U.S. forces, but the allies could not continue the NATO operation if American transport, logistics and other support are withdrawn.
President Joe Biden is reviewing his predecessor’s 2020 deal with the Taliban, which includes a May 1 deadline for a final U.S. troop withdrawal.
In Washington, calls are mounting for the U.S. to delay the final exit or renegotiate the deal to allow the presence of a smaller, intelligence-based American force.
Read more ….
WNU Editor: In the end it is going to be the U.S. that will make the decision if NATO stays in Afghanistan or not …. NATO Waits On U.S. To Review Troop Withdrawal From Afghanistan (NPR).Original Article