Tokyo 2020 releases the first edition of the Games Playbook 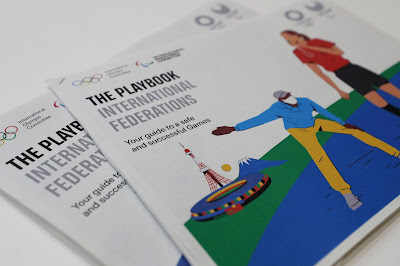 The International Olympic Committee (IOC), International Paralympic Committee (IPC) and the Tokyo 2020 Organising Committee have published the first versions of the Playbook, a guide to the rules and measures that athletes, coaches, officials and all stakeholders will have to follow to ensure delivery of a safe and successful Olympic and Paralympic Games this year.
The series of Playbooks – with one for athletes, officials, media, broadcasters, IFs and NOCs – provides a framework of basic principles that each group must follow before they travel to Japan, when entering Japan, during their time at the Games and when they leave. They provide the direction and set the parameters that will enable teams and organisations to move ahead with their planning at this stage.
The first of this series of Playbooks is, for logistical reasons, aimed at International Federations and Technical Officials. Playbooks for the athletes, media and broadcasters will be published in the coming days. Accompanying the publication of each Playbook will be a series of briefings from the IOC, IPC and Tokyo 2020 with the stakeholders in question.
“This is a really important step for all of us on the road to Tokyo, and we are extremely grateful to the IOC, IPC and the Tokyo organisers for their efforts in putting in place these guidelines that will help all of us to deliver safe and successful Games, and for the athletes to perform at their highest levels”, said World Triathlon President and IOC member, Marisol Casado. “We all need to do our best to follow all the Playbooks, to make sure that the magic of the Games marks an historic moment for all when the Olympic and Paralympic Games take place. Of course these Games will be different, but this is a monumental team effort, and we need to be flexible and remember that the health and safety of everyone is the top priority for all”, she explained.
The Playbooks are the official, centralised source of information for the Olympic and Paralympic Games stakeholders, and will be updated with further details over the coming months, as the global situation relating to COVID-19 becomes clearer ahead of the Games.
The Playbooks also outline a typical journey for each stakeholder group, beginning with measures starting 14 days before arriving in Japan, testing before departure and upon arrival in the country, and the use of smartphone applications to report health and support contact tracing during Games time. Measures will also be in place to identify, isolate and treat any potential positive cases.
In the Athletes and Team Officials Playbook, for example, more information is given about their time in the Olympic and Paralympic Village, where they will be subject to strict control measures to ensure their safety. This will include limiting the amount of time athletes and support staff stay in the Village, restrictions on socialising outside the Village, movement between official Games venues and a COVID-19 screening system that will see athletes and support staff screened throughout the Games.
The measures outlined in the first versions of the Playbooks will be gradually built on over the coming weeks, as and when circumstances change and subsequent decisions are made. Information will continue to be shared and updates to the Playbooks are expected by April and June, providing further details that will allow people to progress to the next stage of planning.
Playbook Briefing Dates:
International Federations – 5 February
Broadcasters – 8 February
Athletes and Team Officials (via National Olympic & Paralympic Committees) – 9 February
Press – 10 February

ABOUT WORLD TRIATHLON
World Triathlon is the international governing body for the Olympic sport of triathlon and all related multisport disciplines around the world, including duathlon, aquathlon, cross triathlon and winter triathlon. Triathlon made its Olympic debut in Sydney 2000, with a third medal event, the Mixed Team Relay, added to the programme at Tokyo 2020, while paratriathlon was first added to the Paralympic programme at Rio 2016. World Triathlon is proudly committed to the development of the sport worldwide, with inclusion, equality, sustainability and transparency at our core as we seek to help triathletes at all levels of the sport to be extraordinary.