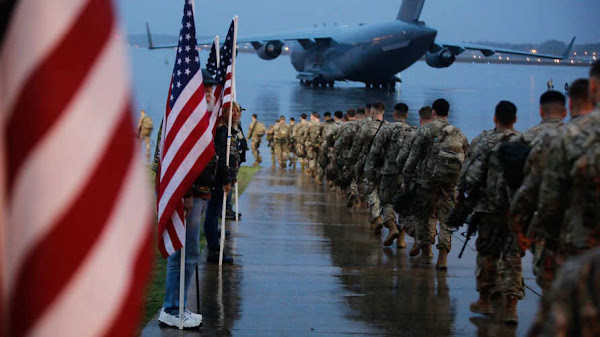 US Army paratroopers prepare equipment and load aircraft at Fort Bragg, N.C. on Jan. 4, 2020. This Pentagon said their deployment is a response to increased threats against US personnel and facilities in Iraq.
CNN: US signals it is open to sending more troops to support NATO's mission in Iraq
(CNN)The Pentagon opened the door to the possibility of sending more American troops to the Middle East as part of a newly expanded NATO training mission to support Iraqi forces and ensure that ISIS does not rise again.
"The US is participating in the force generation process for NATO Mission Iraq and will contribute its fair share to this important expanded mission," Pentagon spokesperson Cmdr. Jessica L. McNulty told CNN.
Secretary of Defense Lloyd Austin spoke about the mission with his NATO counterparts during a meeting with defense ministers on Thursday.
Late Thursday night, Pentagon spokesperson John Kirby clarified that there are "no plans" to send more US troops into Iraq itself. However, US troops could also support the mission from outside the country, a defense official told CNN.
Read more …. WNU Editor: Here is an easy prediction. If these US soldiers are deployed they will primarily be involved in targeting ISIS fighters. Not training Iraqi soldiers.Original Article