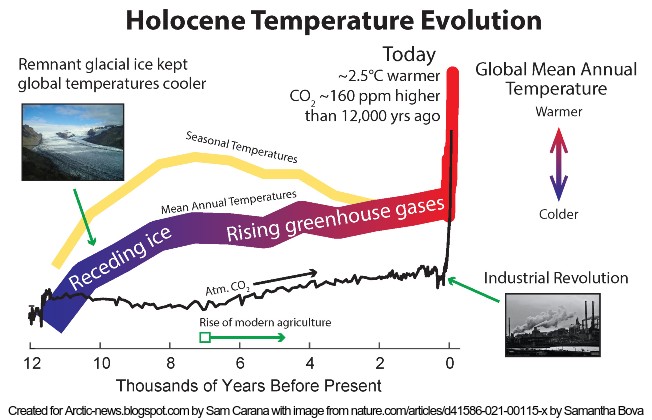 Orbital changes are responsible for the Milankovitch cycles that make Earth move in and out of periods of glaciation, or Ice Ages. In line with these cycles, July insolation has slowly decreased over the last 12,000 years. While insolation was at a peak some 12,000 years ago, temperatures rose only slowly at first, as the ice receded that was formed during the most recent Ice Age.
Some previous temperature reconstructions did suggest that a peak on temperature was reached around 6,000 to 7,000 years ago, followed by a decrease in temperature that continued until the industrial age. However, Samantha Bova and colleagues found that most of the records used in such reconstructions represented seasonal temperatures rather than annual ones.
They developed a method of evaluating individual records for seasonal bias and after adjusting for this, they found that the mean annual sea surface temperature has been rising steadily for the past 12,000 years, due to retreating ice sheets during the period from 12,000 to 6,500 years ago and, more recently, due to the increase in greenhouse gas emissions.
Paris Agreement
The Paris Agreement calls for a global average temperature well below 2°C above pre-industrial levels, with efforts taken to ensure that the temperature doesn't exceed 1.5°C above pre-industrial levels.
So, what are pre-industrial levels? The 'pre-' in pre-industrial means before, suggesting that pre-industrial levels refers to levels as they were in times before the Industrial Revolution started.
While emission of greenhouse gases did rise strongly since the start of the Industrial Revolution, the rise in emission of greenhouse gases by people had already started some 7,000 years ago with the rise in modern agriculture and associated deforestation. As this new study shows, the temperature has risen steadily since.
A recent post confirms earlier warnings that the temperature may already have risen by more than 2°C, and it looks even more that way when moving the baseline back 7,000 years. Moreover, this recent post again warns that the temperature rise is accelerating as tipping points are getting crossed, feedbacks are growing stronger and further heating elements are kicking, all interacting in non-linear ways to speed up the temperature rise.
So, where are those efforts that politicians pledged they would be taking?
What Carbon Budget?
Instead of making a genuine effort, most politicians and mainstream media keep telling people that there was a carbon budget to be divided among polluters, as if people should happily continue to consume the polluting products that are pushed by advertisers, for decades to come.
In reality, however, there is no carbon budget, there is no pollution budget. Instead, there is just a huge pollution debt to be paid and every minute of delay causes exponential growth of this debt and of the prospect of rapid human extinction and ultimately extinction of all life on Earth. 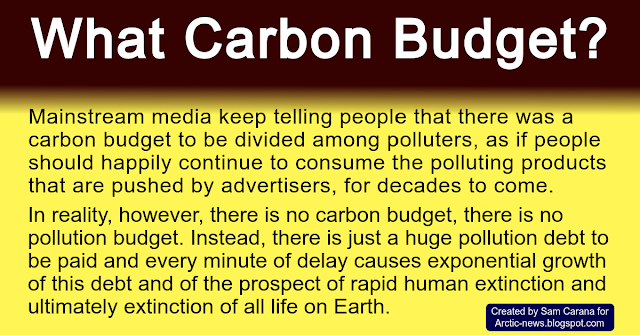 The IPCC image on the right shows CO₂ concentrations (up to 2000 ppm) and, underneath, the temperature rise (relative to 1986-2005) for the various RCPs.
What is RCP2.6? As the IPCC described in AR5, the temperature does not rise above 1.5°C (relative to 1850-1900) under the RCP2.6 scenario, and CO₂ concentrations do not rise above 421 ppm.
It looks like CO₂ concentrations will soon cross this 421 ppm threshold, given that the average daily CO₂ level recorded at Mauna Loa, Hawaii, was 419.12 ppm on February 4, 2021, a record high. The next day, February 5, 2021, the daily level was even higher, 419.45 ppm. The annual peak is typically reached in May, so levels can be expected to rise further over the next few months and cross the 421 ppm threshold soon. 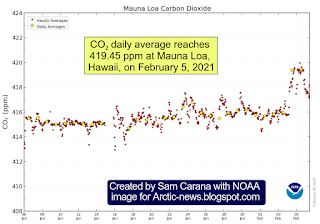 Crossing the 421 ppm threshold implies that the RCP2.6 scenario is no longer applicable and that politicians won't be able to honour the pledges made at the Paris Agreement without geoengineering.
How much could temperatures rise? The IPCC image shows that the IPCC at the time when AR5 was written expected the temperature to rise by 3.7°C (with a range of 2.6°C to 4.8°C) under RCP8.5 by 2081–2100 relative to 1986–2005, and to keep rising beyond 2100 and reach 7.4°C and possibly 9.4°C relative to 1986–2005 over time. 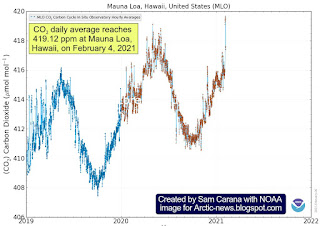 The IPCC adds that, by 2100, CO₂ concentrations would reach 936 ppm under RCP 8.5., but when also (next to CO₂ concentrations) including the prescribed concentrations of CH₄ and N₂O, the combined CO₂-equivalent concentrations for RCP8.5 is expected to rise to 1313 ppm by the year 2100.
Meanwhile, a study discussed in an earlier post found that when the 1200 ppm CO₂-e gets crossed, the clouds feedback starts to kick in that can push the temperature up by an additional 8°C. 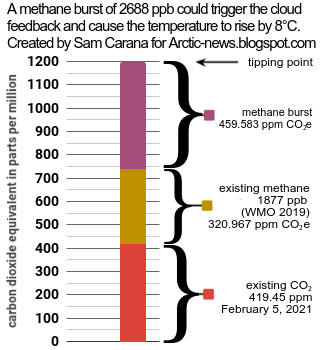 In line with IPCC AR5 figures, methane's Global Warming Potential (GWP) over a few years is 150.
Since AR5 was published, a study found methane's 100 year GWP to be 14% higher than the IPCC value. When applying an extra 14% to methane's short-term GWP of 150, it rises to 171.
Let's take the above (February 5, 2021) CO₂ level of 419.45 ppm and add the WMO 2019 level of methane of 1877 ppb, which with a short-term GWP of 171 translates into heating equivalent of 320.967 ppm CO₂.
Together, the existing CO₂ and methane add up to 740.417 ppm CO₂e, which is 459.583 ppm CO₂e away from the 1200 ppm CO₂e cloud tipping point.
In other words, a methane burst alone could drive up the methane level in the atmosphere by 2688 ppb, resulting in the cloud feedback tipping point to get crossed and the temperature to rise by an additional 8°C. Alternatively, the 1200 ppm CO₂e tipping point could get crossed due to a combination of warming elements, as depicted in the chart below, from a recent post, which would result in a total rise of 18°C when the cloud feedback is added on top.

Methane
A reduction in carbon dioxide levels in the atmosphere isn't the only thing that's needed to avoid the worst of the looming temperature rise. There are many further lines of action that need to be implemented urgently, including efforts to reduce methane levels.
Ominously, high methane levels were recorded by the N20 satellite on the morning of January 20, 2021. The combination image below shows levels as high as 2636 ppb at 695 mb (panel left) and 2806 ppb at 487 mb (panel right). 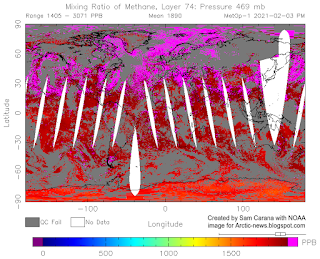 On February 4, 2021 pm, the MetOp-1 satellite recorded methane levels of 3071 ppb at 469 mb, as illustrated by the image in the right.
High peak methane levels are very worrying; what makes it even more threatening is that so much of the Arctic Ocean on above images is showing to be covered by high methane levels.
This supports fears expressed earlier, such as in this recent post, about methane's present and future role in accelerating the temperature rise. 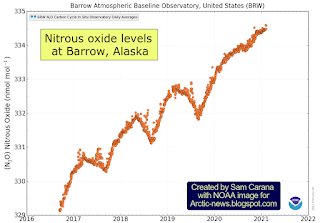