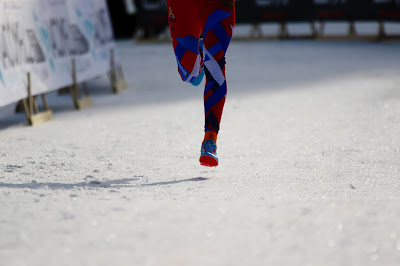 With many regions in Europe enjoying abundant snowfalls, the season of Winter Triathlon kicks off this year in Asiago for the World Triathlon Asiago Winter Cup, due to take place in the beautiful Italian ski resort on February 17-19.
The previous edition of the World Triathlon Winter Cup was held last year in Harbin (China), where participants from all over the world enjoyed magnificent and cold conditions, with the air temperature on 16C below zero.
For the kick-off of the 2021 season, Asiago is now ready to host this event after hosting successfully two consecutive winter Triathlon World Championships in 2019 and 2020. This year, for the World Cup, elite races will be held on Friday, February 19th, with a winter cross duathlon event planned for Saturday and the Italian National championships planned for Sunday.
All the races will be contested in the Centro di Fondo Campolongo, in Altopiano di Asiago, one of the most fascinating areas in the Venetian mountains. With an average altitude of 1500 metres, the snow arrives abundantly every winter, and is the perfect location for competitions and training of cross-country ski, mountain bike and trail running, all around magnificent forests.
The event will take place following all the COVID guidelines and following all the restrictions and recommendations implemented by World Triathlon and the local authorities, to guarantee the safety of all participants.
For those not familiar yet with Winter Triathlon, is one of the latest additions to the triathlon portfolio of events, with athletes competing over a 4km run in the snow, to be followed by a 12km bike ride also over the snow and finishing with 10km of cross-country skiing. You can watch all of the action on the home of multisports

TriathlonLIVE.tv
The next event in the calendar will be the World Triathlon Andorra Winter Championships, due to take place on March 19-21.
Unfortunately, the current situation in Romania has forced the organisers of the Cheile Gradistei European Championships, due to take place on 13-14 March, to postpone the event until December 2021, but this will give winter triathlon athletes the possibility to extend the season, with an event in the calendar to wrap up the year as it started: in the snow.

ABOUT WORLD TRIATHLON
World Triathlon is the international governing body for the Olympic sport of triathlon and all related multisport disciplines around the world, including duathlon, aquathlon, cross triathlon and winter triathlon. Triathlon made its Olympic debut in Sydney 2000, with a third medal event, the Mixed Team Relay, added to the programme at Tokyo 2020, while paratriathlon was first added to the Paralympic programme at Rio 2016. World Triathlon is proudly committed to the development of the sport worldwide, with inclusion, equality, sustainability and transparency at our core as we seek to help triathletes at all levels of the sport to be extraordinary.