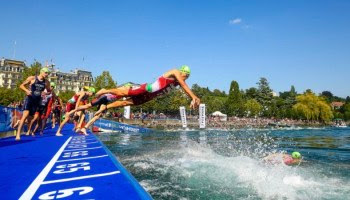 The organisers of the 2021 World Triathlon Championship Series Abu Dhabi have planned for a Mixed Relay event to take place the same weekend.

The first look at the full 2021 World Triathlon calendar approved by the Executive Board reveals plenty of elite racing ahead in the coming months, so get your calendars ready and save the dates! The World Triathlon Championship Series and the World Triathlon World Cups are due to restart after 1 May.

The World Triathlon Championship Series season is currently scheduled to begin in the classic Olympic distance challenge of Yokohama, Japan on 15 May.

The Championships move to the UK the following month, with Leeds hosting on 5 June, before a return to Montreal on 26-27 June, both cities having been regulars on the World Triathlon calendar since 2016.

Hamburg marks its 20th successive season as the home of top-level triathlon on 10 July, the milestone also providing the last taste of Championship Series action before the Tokyo 2020 Olympic Games begin.

The dates for the World Triathlon Championships Series Chengdu will be confirmed as soon as possible.

World Triathlon Cup Miyazaki, due to take place on 20 March, unfortunately had to be canceled by the Japanese Triathlon Union and the local organizing committee, due to the current travel restrictions in the region.

With this on mind, the World Triathlon Cup season is due to open in Osaka, Japan on 8-9 May, a city that welcomes the circuit for the first time.

Also a newcomer in the world cup circuit will be Lisbon, that after hosting successfully European evens, has stepped up and will organise the second stop of the world cups, the first one in Europe, on May 22-23.

The World Triathlon season as a whole will in fact get under way at the Winter Cup in Asiago on 19 February, followed by the Winter Championships in Andorra on 19-21 March.

The World Triathlon Para Championships Milan will crown the best in the world on 8 May in Italy, with the year’s Para Championship Series action taking place in Yokohama, Leeds and Montreal on the same weekends as the WTCS action. Two Para Cups will be held ahead of the Tokyo Paralympic Games, in Besancon, France (12-13 May), A Coruna, Spain (20 June), followed by Alanya, Turkey (1 October) and Miyazaki, Japan (23-24 October), before closing out in Alhandra, Portugal (30-31 October).

September will see the 2021 World Triathlon Multisport Championships Almere-Amsterdam run from 3-12 of the month, promising a feast of world championship action at all levels in Aquathlon, Aquabike, Cross Triathlon, Duathlon and Long Distance Triathlon.

As with those races that were able to take place in the second half of 2020, new World Triathlon protocols will be put in place and close collaboration with LOCs is already underway to ensure the safest possible conditions for the athletes, teams and all involved in holding the events. All races are subject to change given the continued uncertainty around the Covid-19 pandemic.