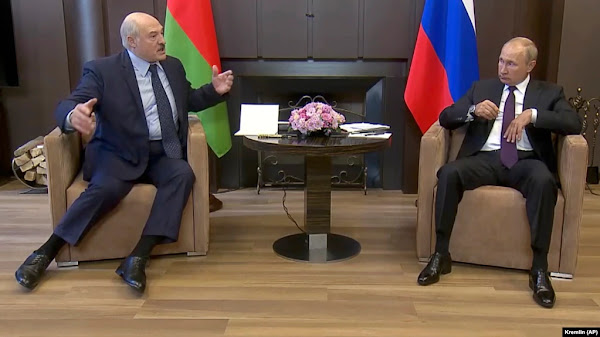 Belarus's Alyaksandr Lukashenka (left) with Russian President Vladimir Putin in Sochi in September
RFE: Lukashenka Says He Will Not Ask For Money At Talks With Putin
Belarusian leader Alyaksandr Lukashenka says he does not plan to ask for money from Russia when he holds talks in Moscow with President Vladimir Putin on February 22.
Russian presidential press secretary Dmitry Peskov on February 18 confirmed the meeting of the two leaders, saying he expects a "quite extensive" discussion on issues ranging from bilateral relations to international issues.
One thing that won't be on the agenda, Lukashenka said at a meeting with the State Secretary of the Russia-Belarus Union state, Grigory Rapota, is a request from Minsk for money.
Read more ….
WNU Editor: He will be asking for money. My friends in Belarus tell me that after months of protests and sanctions, the economy is in a total mess.Original Article

Previous Transnistria 1 ruble 2020 – 30th Anniversary of the PMR
Next Is The Earth’s Magnetic Field About To Flip As It Did 42,000 Years Ago?