zekal3_3 2021-02-20 Fashion, Life & Love Comments Off on Israel Reacts To The Biden Administration’s Push To Engage In Talks With Iran 51 Views 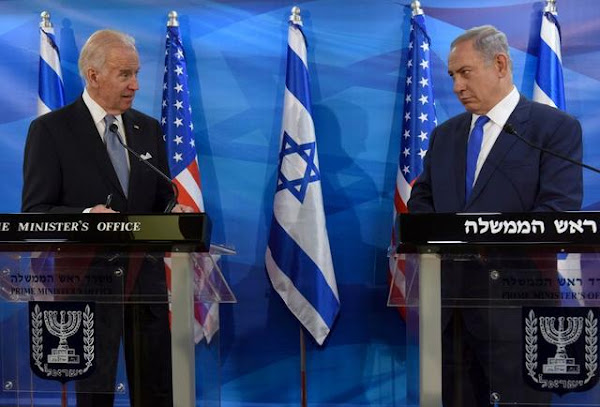 FILE PHOTO: U.S. Vice President Joe Biden (L) and Israeli Prime Minister Benjamin Netanyahu look at each other as they deliver joint statements during their meeting in Jerusalem March 9, 2016. REUTERS/Debbie Hill/Pool/File Photo
Times Of Israel: Netanyahu: US return to ‘old deal’ will pave Iran’s path to nuclear arsenal
As White House inches toward talks with Tehran, Iran’s FM says country will immediately ‘reverse all remedial measures’ if US unconditionally lifts sanctions imposed by Trump
Prime Minister Benjamin Netanyahu responded on Friday to the United States’ announcement that it was willing to hold talks with Tehran on a return to the nuclear deal, saying Israel believes the old agreement will “pave Iran’s path to a nuclear arsenal.”
“Israel remains committed to preventing Iran from getting nuclear weapons and its position on the nuclear agreement has not changed,” the Prime Minister’s Office said in a statement.
“Israel believes that going back to the old agreement will pave Iran’s path to a nuclear arsenal. Israel is in close contact with the United States on this matter.”
Read more ….
WNU Editor: I am willing to bet that this is the reason why President Biden called Israeli PM Netanyahu on Wednesday. To inform Netanyahu that the US was going to restart talks with Iran …. US President Biden Speaks To Israeli PM Netanyahu For The First Time Since Taking Office (February 17, 2021).
More News On Israeli Reaction To The Biden Administration Push To Engage In Talks With Iran
Israel sounds alarm after U.S. backs nuclear talks with Iran — Axios Concern in Israel Over US Announcement Welcoming Nuclear Talks With Iran — Algemeiner Israeli leaders ‘not too pleased’ with Biden agreeing to nuclear talks with Iran — SKY News A Return to ‘Old Agreement’ Will ‘Pave Iran’s Path to Nuclear Arsenal’, Netanyahu Says — SputnikOriginal Article

Previous Tonight’s Movie Is ‘The Enemy Below’ (1957)
Next U.S. Setting Up New Military Bases In Syria