zekal3_3 2021-02-22 Fashion, Life & Love Comments Off on Chinese Spyware Code Was Copied From America’s NSA And Was Used For Years 48 Views 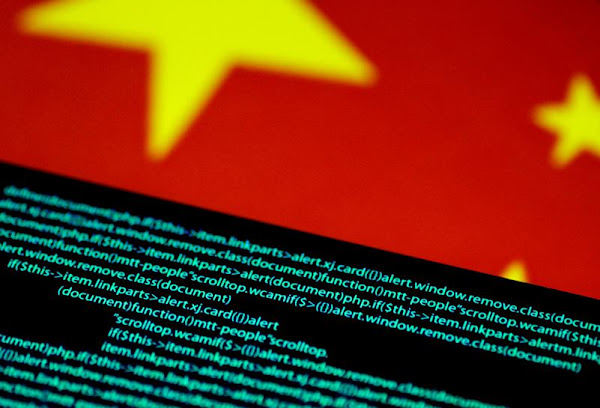 FILE PHOTO: Computer code is seen on a screen above a Chinese flag in this July 12, 2017 illustration photo. REUTERS/Thomas White
Reuters: Chinese spyware code was copied from America's NSA: researchers
WASHINGTON (Reuters) – Chinese spies used code first developed by the U.S. National Security Agency to support their hacking operations, Israeli researchers said on Monday, another indication of how malicious software developed by governments can boomerang against their creators.
Tel Aviv-based Check Point Software Technologies issued a report noting that some features in a piece of China-linked malware it dubs “Jian” were so similar they could only have been stolen from some of the National Security Agency break-in tools leaked to the internet in 2017.
Yaniv Balmas, Checkpoint’s head of research, called Jian “kind of a copycat, a Chinese replica.”
Read more ….
Update #1: China Hijacked an NSA Hacking Tool in 2014—and Used It for Years (Wired) Update #2: Chinese hackers cloned attack tool belonging to NSA’s Equation Group (ZDNet) Update #3: Chinese Hackers Had Access to a U.S. Hacking Tool Years Before It Was Leaked Online (Hacker News)
WNU Editor: I guess they assessed that the tools were great to use, and so they used them. Makes you wonder if it is the Chinese who are responsible for this rather than the Russians …. Microsoft President Says SolarWinds Hack Is The 'Largest And Most Sophisticated Attack The World Has Ever Seen' (February 15, 2021).Original Article