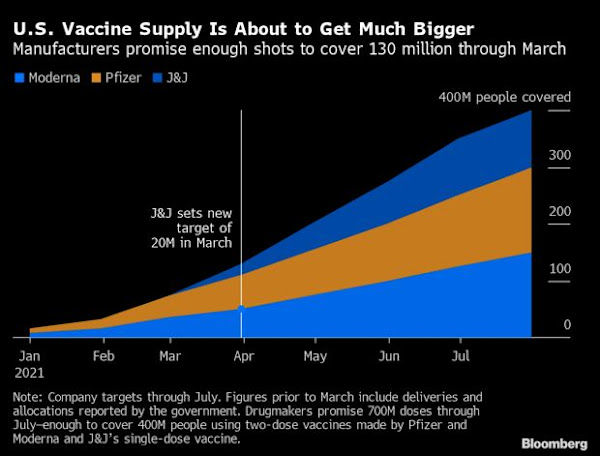 Reuters: Pfizer to ship 13 million COVID-19 vaccine doses per week to U.S. by mid-March, says executive
(Reuters) – Pfizer Inc expects to deliver more than 13 million doses of its COVID-19 vaccine per week to the United States by the middle of March, more than doubling its shipments from early February, a top Pfizer executive said in prepared testimony ahead of a Tuesday congressional hearing.
Pfizer is on track to deliver 120 million doses of its two-dose regimen by the end of March, said John Young, Pfizer’s chief business officer. Pfizer is also prepared to provide a total of 300 million shots to the United States by the end of July and has raised global production expectations for 2021 to at least 2 billion doses, he said.
Read more ….
Update #1: U.S. Will Have Enough Vaccine for 130 Million People by End of March (Bloomberg). Update #2: COVID-19 vaccine makers pledge massive supply increase (The Hill)
WNU Editor: Pfizer's goal of producing 2 billion doses this year is impressive. And these vaccines are working …. The growing evidence that the Covid-19 vaccines can reduce transmission, explained (VOX). But the sad fact is that even with all of this production, most of the world will not be vaccinated until the end of 2022. And then are the variants, who may with time make these vaccines less effective as advertised.Original Article