zekal3_3 2021-02-23 Fashion, Life & Love Comments Off on US Army Is Developing The Most Powerful Laser Weapon In The World 51 Views 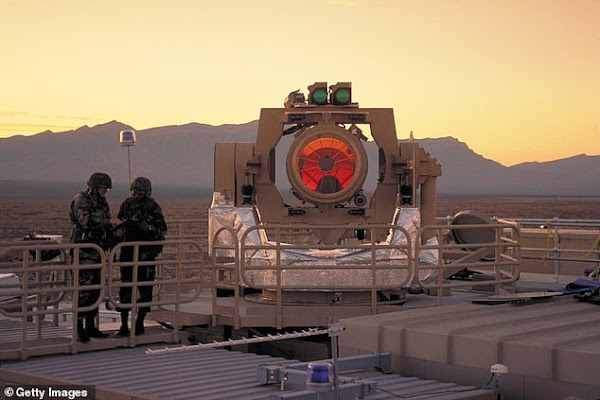 Pictured: A beam director element of the Army's Tactical High Energy Laser (THEL)
Daily Mail: US Army is developing a the 'most powerful' laser in history which will vaporize targets using short pulses and produce powerful signals to disrupt enemy electronics
* The Tactical Ultrashort Pulsed Laser for Army Platforms will emit short pulses * For a scant 200 femtoseconds, the burst would be a million times stronger than current lasers * The result would evaporate the surface of a drone and cause a blast wave * Its also though the USPL could cause an electromagnetic pulse (EMP)
The US Army is developing its most powerful laser yet that is a million times more powerful than current systems.
Most laser weapons fire a continuous beam until a target melts or catches fire, but the Tactical Ultrashort Pulsed Laser (UPSL) for Army Platforms will emit short, pulse-like bursts.
Its being designed to reach a terawatt for a brief 200 femtoseconds, which is one quadrillionth of a second, compared to the 150-kilowatt maximum of current systems.
Read more ….
Update #1: US Army Is Building The World's 'Most Powerful' Laser Weapon (Interesting Engineering) Update #2: The US Army is building the most powerful laser weapon in the world (New Scientist)
WNU Editor: The US Army has a lot of catching up to do when compared to the US Navy …. Navy to Fully Integrate Laser into Aegis Combat System (Updated) (National Defense).Original Article