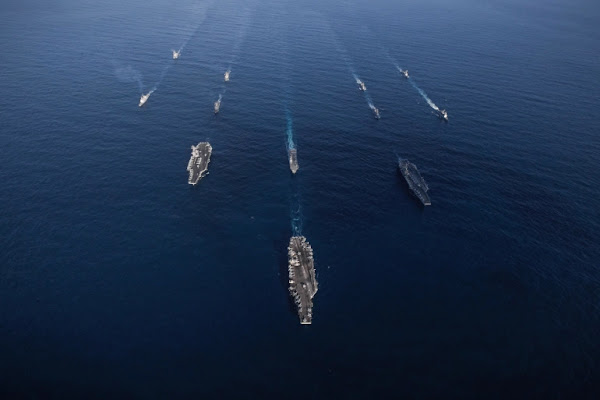 About 55,000 US military personnel are stationed in Japan, including the US Navy's Seventh Fleet [Reuters]
CNN: Japan increases protection for US military amid 'severe security environment'
Hong Kong (CNN)Japan's military performed 25 missions in 2020 in defense of US ships or planes, a sign of the growing integration of two of Asia's most powerful armed forces.
The number of what Japan calls "asset protection" missions was up from 14 in 2019 amid a "severe security environment," according to an announcement from Japan's Ministry of Defense.
The Japanese military said the 25 missions involved Japan Self-Defense Forces (SDF) protecting US Navy ships on four occasions while those ships were gathering information on ballistic missiles or other warning or surveillance activities. In 21 instances, the missions involved protecting US aircraft that were in joint training with their Japanese counterparts.
Read more ….
WNU Editor: More signs of U.S. and Japan military cooperation …. U.S., Japan Begin Joint Military Drills after China Enters Japanese Waters (Newsweek), and this …. Japan, US extend agreement on military base payments (Al Jazeera).Original Article

Previous Biden Administration Prepares To Impose Sanctions On Russia
Next U.S. Strategy Paper On China Does Not impress Beijing