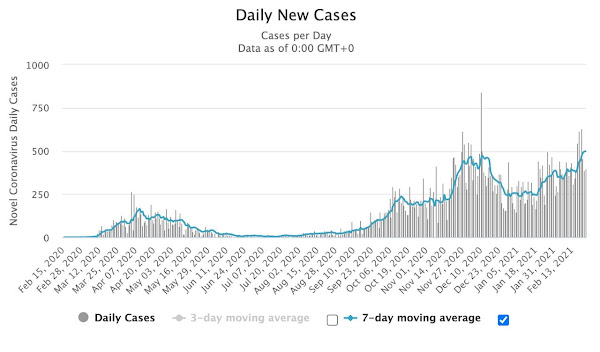 Daily Mail: Now scientists spot ANOTHER Covid variant: Finland detects strain that 'shares mutations with South African version' that makes vaccines slightly less effective
* Only one case of variant temporarily named Fin-796H has been spotted so far * Finnish experts who detected variant called combination of mutations 'unique' * British scientists today told MailOnline there was no reason to panic yet
Finnish scientists claim to have found another coronavirus variant which shares some of the same mutations as other troublesome strains.
Only one case of the virus — temporarily named Fin-796H — has been spotted so far but experts have admitted they are unsure how widespread it is.
Finland said was unlikely the variant emerged there, given the country's low infection rate. The Scandinavian nation has recorded just 51,000 cases and 700 deaths since the pandemic took off.
Read more ….
Update #1: New Mutant COVID Strain Discovered In Finland Which May Evade Tests (Zero Hedge) Update #2: New Coronavirus Strain Found in Finland, May Be Difficult to Detect, Study Says (Latest LY)
WNU Editor: The good news is that only one case has been detected so far. The bad news is that Finland is not experiencing a drop in cases that most Western countries are experiencing (see top graph).Original Article