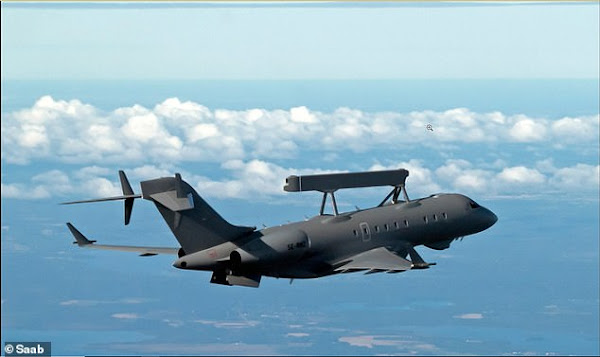 The SAAB GlobalEye spy plane, pictured, uses the body of a Bombardier Global 6000 business jet for its base
Daily Mail: Detailed plans of military spy plane are leaked on the dark web by hackers after Canadian manufacturer Bombardier 'refused to pay ransom'
* Details from the hack appear to have been released on the darkweb site CL0P^_- LEAKS * Forensic analysis revealed that personal and other confidential information relating to employees, customers and suppliers was compromised * The Clop site was launched in March 2020 to publish data stolen from non-paying victims held hostage using the ransomware * Companies that recently appeared to fall victim to Clop ransomware include the law firm Jones Day, which represents former President Donald Trump * Financial cyber-crime gang FIN11 is believed to be behind the series of recent Clop ransom campaigns * Some of the documents leaked appear to show specifications for the GlobalEye radar and mission system
Details for a military spy plane appear to been leaked on the dark web by hackers as it is believed manufacturer Bombardier refused to pay a ransom.
Canadian business jet manufacturer Bombardier, whose Global 6000 jet is used for Saab's GlobalEye spy plane system, announced on Tuesday that it recently suffered 'a limited cybersecurity breach.'
The leak, posted to the darkweb site CL0P^_- LEAKS, appears to show specifications and mechanics for the GlobalEye airborne early warning and control platform developed by the Swedish defense company Saab.
Read more ….
Update: Hackers share details of Canadian military spy plane on dark web (The Independent)
WNU Editor: Bombardier is saying that this was a 'limited cyber security breach'. I am not sure about that. It looks like these hackers had access to a lot of stuff. Who knows what else they may have taken.Original Article

Previous Entire US Federal Reserve Payment System Crashes For Three Hours Due To ‘Operational Error’ Freezing $3Trillion In Daily Transactions
Next Are These the High-Tech Combat Drones Of The Future?