The Battle of 73 Easting 30 Years Ago Was The Last Great Tank Battle Of The 20th Century, And A Battle That Changed The Course Of Warfare 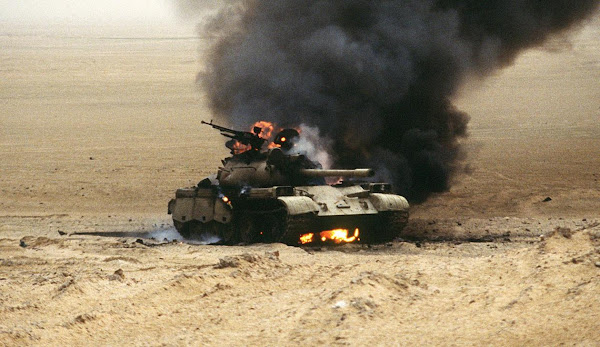 Photo: Public Domain via Wikipedia
BattleSwarm Blog: The 30th Anniversary of 73 Easting
Thirty years ago, on February 26, 1991, units of the American Second Armored Cavalry Regiment engaged the armor of the Iraqi Republican Guard Tawakalna Division in the Battle of 73 Easting.
The furious action lasted twenty-three minutes. The troop stopped when there was nothing left to shoot. Sporadic contact ranged from nuisance machine gun fire to one company-sized counterattack of T-72s and BMP armored personnel carriers. Tanks and Bradleys destroyed enemy vehicles at long range from the dominating position on the ridge. Three Bradleys from first platoon, led by Lieutenant Michael Petschek, encountered and destroyed four T-72s as they moved north to reestablish physical contact with G Troop. Medics treated and evacuated enemy wounded. Crews cross-leveled ammunition. Mortars suppressed enemy infantry further to the east as our fire support officer, Lieutenant Dan Davis, called in devastating artillery strikes on enemy logistical bases. Scouts and a team under the control of First Sergeant Bill Virrill cleared bunkers using grenades and satchel charges, and then led a much-needed resupply convoy through minefields to our rear. A psychological operations team broadcasted surrender appeals forward of the troop and the troop took the first of hundreds of prisoners including the brigade commander. Soldiers segregated, searched, and secured prisoners through the night. Many prisoners cried because they had not expected such humane treatment; their officers had told them that we would execute them. The prisoners were incredulous when our soldiers returned their wallets without taking any of the money that they had looted from Kuwait City. Just after 2200, 1ID conducted a forward passage of lines in Third Squadron’s area of operation to our south.
The morning after the battle, soldiers were exhausted. Many of the approximately fifty T-72s, twenty-five armored personnel carriers, forty trucks and numerous other vehicles that the troop destroyed were still smoldering. Our troop had taken no casualties.
Read more ….
WNU Editor: I must admit that I was shocked on how quickly US and coalition ground forces destroyed the Iraqi Army in this war. Within 100 hours the war was over, and the realization that technology had changed how large scale land battles were to be fought.
More News On The Battle Of 73 Easting
‘The last great tank battle’ was a slugfest of epic proportions — We Are The Mighty 2nd Cavalry Regiment remembers Battle of 73 Easting – Middle East — Stars and Stripes The Battle of 73 Easting: The True Story Behind Desert Storm’s Most Intense Tank Battle — National Interest The untold story of the world’s fiercest tank battle — Natonal Geographic How the Battle of 73 Easting Was Won — National Interest 2nd Cavalry Regiment’s Battle of 73 Easting remembered — Dvids 10 Lessons from the Battle of 73 Easting — HR McMaster, National Interest Hat Tip James for this story.Original Article