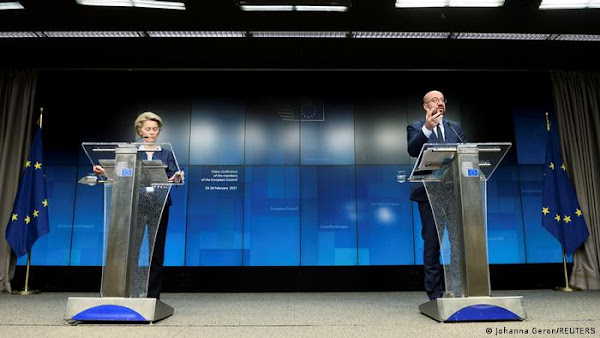 European Commission President Ursula von der Leyen and European Council President Charles Michel hold a news conference following a virtual summit on security and defense
DW: EU leaders pledge more cooperation on defense
NATO chief Jens Stoltenberg joined talks to boost defense and security. EU leaders have also been discussing the threat of cyberattacks and the rise of China.
European Union leaders agreed on a new strategy aimed at boosting defense and security in the bloc on Friday.
Member states want to sign off on the plans early next year, said European Council President Charles Michel.
"We want to increase defence investment, and we want to enhance civilian and military capabilities and operational readiness," Michel told reporters.
Read more ….
WNU Editor: Under President Trump NATO members were pressured to spend more after saying for years before Trump that they were going to spend more. I have heard these commitments and promises before. Will it happen under a Biden Presidency? I have my doubts but I am willing to wait and see.Original Article

Previous U.S. vs China: The Battle for Bitcoin Mining Supremacy
Next Why It Is Not A Good Idea To Pick A Fight With Russia