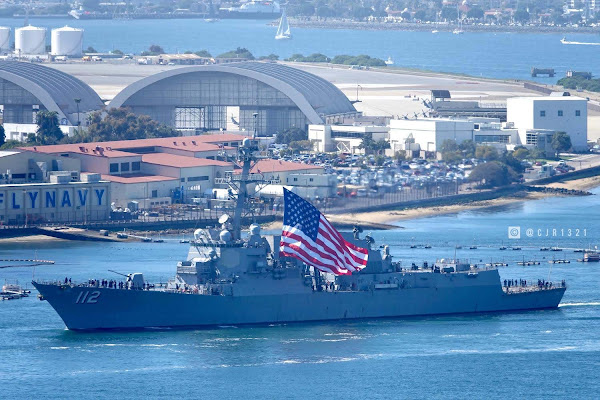 @CJR1321 VIA @WARSHIPCAM
Warzone/The Drive: Navy Destroyer Pulled Into San Diego Flying An Absolutely Gargantuan American Flag (Updated)
USS Michael Murphy strutted into San Diego Bay in style flying the biggest American Flag we have ever seen on a U.S. Navy surface combatant.
The trend of American warships flying ever-larger flags—sometimes Old Glory and sometimes flags unique to each ship's lore and culture—continues to expand. Seeing one of these fighting ships with a huge American flag unfurled while underway is a stirring sight for countrymen and allies, and an intimidating one for enemies. Multiple ships sailing together in formation all flying the American flag, which is also the U.S. Navy's National Ensign, can be even more impactful. Yet there is one ship in the fleet that has taken this practice to another level, the Arleigh Burke class destroyer USS Michael Murphy (DDG-112). Case in point, its grand entrance into San Diego Bay on February 24th, 2021.
Read more ….
WNU Editor: That is one big flag.Original Article