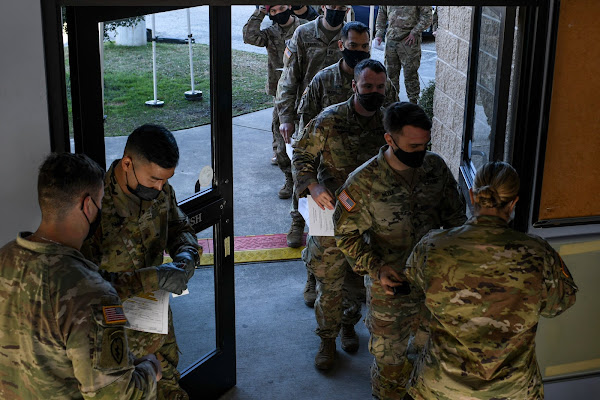 Soldiers lining up for a medical screening before receiving the coronavirus vaccine at Fort Bragg in North Carolina.Credit…Kenny Holston for The New York Times
New York Times: Younger Military Personnel Reject Vaccine, in Warning for Commanders and the Nation
About one-third of the troops have declined to take the vaccine. Many say they worry the vaccines are unsafe or were developed too quickly. Others want a sense of independence, even in uniform.
WASHINGTON — Americans who go into the military understand the loss of personal liberty. Many of their daily activities are prescribed, as are their hairstyles, attire and personal conduct. So when it comes to taking a coronavirus vaccine, many troops — especially younger enlisted personnel as opposed to their officers — see a rare opportunity to exercise free will.
“The Army tells me what, how and when to do almost everything,” said Sgt. Tracey Carroll, who is based at Fort Sill, an Army post in Oklahoma. “They finally asked me to do something and I actually have a choice, so I said no.”
Sergeant Carroll, 24, represents a broad swath of members of the military — a largely young, healthy set of Americans from every corner of the nation — who are declining to get the shot, which for now is optional among personnel. They cite an array of political and health-related concerns.
Read more ….
WNU Editor: A lot of young people that I know are not going to take the vaccine, and they are not in the military. I think it comes down to a lack of trust and a concern that not all of the side-effects have been charted out.Original Article