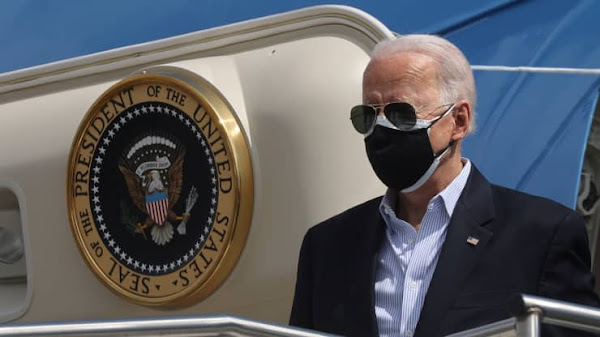 President Joe Biden arrives at Ellington Field Joint Reserve Base in Houston, Texas, U.S., February 26, 2021. Jonathan Ernst, Reuters
CNBC: Biden tells Congress Syria strikes are consistent with U.S. right to self-defense
* President Joe Biden on Saturday told Congress that his orders for airstrikes in Syria were consistent with the U.S. right to self-defense. * “I directed this military action to protect and defend our personnel and our partners against these attacks and future such attacks,” Biden wrote in a letter to Congress. * Biden’s decision to launch an airstrike Thursday night in Syria was in response to rocket attacks against U.S. targets in Iraq.
President Joe Biden on Saturday told Congress that the airstrikes he ordered in Syria this week were consistent with the U.S. right to self-defense, as members of his own party called for more transparency about why military action was taken without congressional authorization.
“The United States took this action pursuant to the United States’ inherent right of self-defense as reflected in Article 51 of the United Nations Charter,” Biden wrote in a letter to House Speaker Nancy Pelosi and President pro tempore of the Senate Patrick Leahy.
Read more ….
Update #1: Biden sends letter to congressional leadership explaining justification for Syria strike (CNN) Update #2: Biden explains justification for Syria strike in letter to Congress (Axios)
WNU Editor: The letter is here …. A Letter to the Speaker of the House and President pro tempore of the Senate Consistent with the War Powers Resolution (White House).
According to his letter. President Biden says that to protect US forces he had to order the bombing of an installation in Syria because it was used by militias from another country (Iraq) who are backed by another country (Iran).Original Article