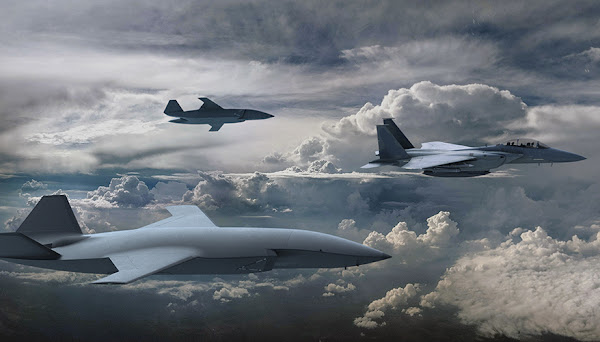 Boeing illustration
National Defense: BREAKING: Robo-Jets Part of Mix for Air Force TacAir Study
Robotic fighter jets — now in their experimental phase — will be part of an upcoming study to determine the right numbers and mix of Air Force tactical aircraft, the service’s Chief of Staff Gen. Charles “CQ” Brown Jr., said Feb. 25.
Brown on Feb. 17 announced that he wanted a tactical air study to determine the right mix of new and legacy tactical aircraft the service will need in the future. As this study will be looking 10 to 15 years in the future, it will have to consider that autonomous fighter jets — serving as robotic wingmen to manned aircraft — might then be part of the mix, he said.
“One of the conversations we are having is, what does a fighter squadron look like in the future?” he told reporters in a virtual press conference. How many manned and how many unmanned platforms should be part of a squadron? he asked.
Read more ….
WNU Editor: This is the future of air warfare. The only question that remains unanswered is when will this be operational.Original Article

Previous Report: China Likely To Attack Taiwan Within Five Years
Next Design and production of munitions are priority for Russian armed forces – Part 5