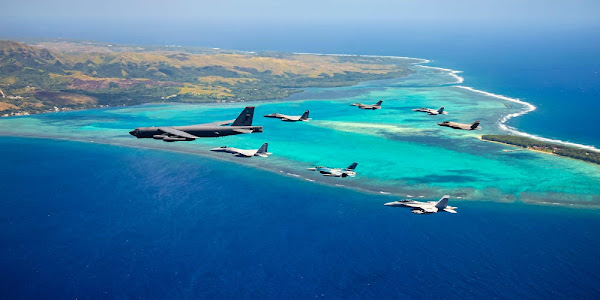 An eight-plane formation over Guam during exercise Cope North 21, February 9, 2021. US Air Force/Senior Airman Duncan C. Bevan
Business Insider: The US Air Force's plan to dodge Chinese missiles means new jobs for airmen who keep fighters flying
* With an eye on China's growing missiles, the US Air Force is training to spread its forces out. * Dispersed operations means airmen will be spread thin, so the Air Force is training them to do more.
The US Air Force's efforts to disperse its forces have gained new urgency as the Chinese military grows in size and reach, but operating from far-flung, often austere airfields creates new logistical challenges. To overcome them, the service is asking its airmen to take on new tasks.
Expeditionary operations aren't new for the Air Force, but they're getting special attention in the Pacific, where important facilities, like Anderson Air Force Base on Guam, are within range of Chinese missiles.
The Air Force has spent more time refining a concept known as Agile Combat Employment, which pairs bases like Anderson, or hubs, with remote airfields, called spokes. To support operations at those spokes, the service is looking to "multi-capable airmen," who have been trained do tasks outside their assigned specialties.
Read more ….
WNU editor: This new training to handle logistics and operations that are dispersed makes sense. If there is ever a conflict between the U.S. and China. To me it is a given that these major US bases in the Western Pacific will be targeted and destroyed very quickly.Original Article