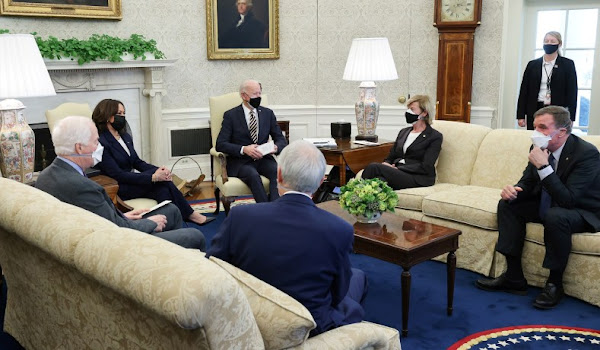 President Biden and Vice President Harris host a meeting with a bipartisan group of House and Senate members at the White House in Washington, D.C., February 24, 2021. (Jonathan Ernst/Reuters)
Politico: Biden won’t release White House virtual visitor logs
Government watchdogs are urging Biden to do more to keep the American public informed, including releasing virtual visitor logs.
Few bars have been set lower than the one Joe Biden has had to clear when it comes to bringing transparency back to the White House. Donald Trump has been an easy act to follow.
But five weeks into office, Biden has fallen short of his former boss, Barack Obama, in several areas, and is under pressure to do more to restore confidence in the federal government following Trump’s chaotic term in the White House.
Among the critiques: The schedules for the president and vice president aren’t posted online. The White House comment line is shut down. There are no citizen petitions on the White House’s website.
The White House has committed to releasing visitor logs. But it doesn’t plan to divulge the names of attendees of virtual meetings, which are the primary mode of interaction until the coronavirus pandemic eases.
And while Biden has received kudos for keeping the American public informed, primarily by resuming the daily White House press briefings, he has yet to hold a news conference of his own.
Read more ….
WNU editor: So much for all of this talk on "transparency".
More News On The White House Refusing To Release Its ‘Virtual Visit’ Logs
Biden White House not releasing virtual visitor logs as watchdogs call for transparency — FOX News
Biden White House has yet to release visitor logs — NYPost
White House Declines to Release Virtual Visitor Logs — National Review
White House refuses to release ‘virtual visit’ logs, claims they are like phone records, as watchdogs urge transparency from Biden — RTOriginal Article

Previous Commentaries, Analysis, And Editorials — March 2, 2021
Next U.S. Air Force Is Having To Reverse Engineer Parts Of Its Own B-2 Stealth Bomber