zekal3_3 2021-03-05 Fashion, Life & Love Comments Off on Will Saudi Arabia And Russia Push Oil Prices To $100/Barrel And Send A Message To The Biden Administration 22 Views 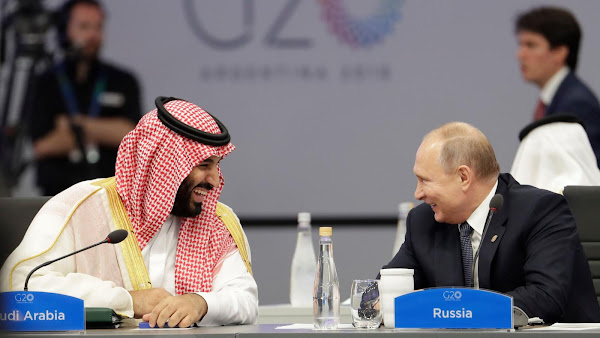 Mohammad bin Salman and Vladimir Putin have become fast friends. AP PHOTO/NATACHA PISARENKO
Princeton Energy Advisors: Towards $100 Oil
WTI stood at $61.50 / barrel when we issued our weekly assessment of EIA oil markets data yesterday. Nevertheless, we stated that, "We might expect WTI at $64 / barrel this time next week, and $65-66 / barrel would not be surprising." We did not need a week. Less than twenty-four hours later, WTI had surged above $64 / barrel. It could well rise far above this level, and with shocking speed.
Bloomberg notes:
OPEC+ decided to keep a tight limit on oil production next month, sending prices soaring in a market that had been expecting additional supply. The agreement is a victory for Saudi Arabia, which has consistently pushed to tighten the market. The cartel had been debating whether to restore as much as 1.5 million barrels a day of output. But after being urged to “keep our powder dry” by Saudi Energy Minister Prince Abdulaziz bin Salman, members agreed to hold steady at current levels — with the exception of modest increases granted to Russia and Kazakhstan. In a briefing after Thursday’s meeting, the prince went one step further by making the kingdom’s additional 1 million barrel-a-day production cut open-ended. He gave no date for phasing out the voluntary reduction and told reporters he is in no hurry to do so.
Read more ….
WNU Editor: There are probably many in the Biden administration who are hoping for $100/barrel. In their minds this will push the U.S. to find alternative energy sources. But for most Americans a $4 to $5 price for a gallon of gasoline is going to be crippling.Original Article