Kremlin Warns The U.S. Not To Launch Cyberstrikes On Russia 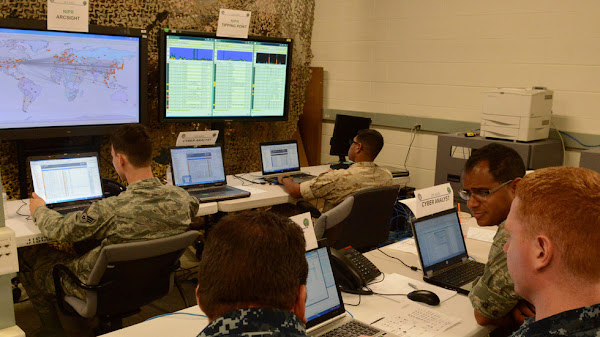 Cyber defense operations using ArcSight at the U.S. Army Communications-Electronics Command, Aberdeen Proving Ground, Maryland, US, June 25, 2014. Picture taken June 25, 2014. © David Vergun/US Army Services/Handout via REUTERS
US News and World Report: Russia Warns Against U.S. Retaliation for SolarWinds Amid Fears of Cyberwar
The hackers in last year’s sweeping attack on U.S. federal servers did not destroy anything, analysts say. That could change if the Biden administration escalates conflict with Moscow.
RUSSIA ON TUESDAY warned against pending action that U.S. officials say will take place in retaliation for the massive and ongoing hack into federal computer servers despite the potential for a devastating cyberwar.
"This is nothing more than international cybercrime," Dmitry Peskov, a spokesman for the Kremlin and Russian President Vladimir Putin, told reporters Tuesday morning, according to a translation of his remarks.
He spoke in response to a series of claims from U.S. officials, including Secretary of State Antony Blinken and FBI Director Christopher Wray, that they are considering harsh punishments on Russia for the attack, including overt sanctions and some form of covert salvos in the cyber realm.
Wray hinted at the action in testimony before Congress this month, saying the U.S. was preparing cyber "joint sequenced operations."
Read more ….
WNU Editor: If this US cyberstrike causes damage, to me it is a given that the Kremlin will respond. the bigger danger is that this could quickly escalate out of control.
More News On The Kremlin Warning The U.S. To Not Launch Cyberstrikes On Russia
Biden preparing to launch series of ‘clandestine’ cyberattacks against Russia – NYT — RT
Kremlin: Report On Planned U.S. Cyberstrikes On Russia 'Alarming' — RFE
Moscow concerned about reports of US plans to conduct cyberattacks on Russia — Kremlin — TASS
Kremlin: Alleged US Plans to Stage Cyberattacks on Russian Networks Would Amount to Int'l Crime — Sputnik
Kremlin calls NYT report on planned US cyberstrikes on Russia 'alarming' — Jerusalem Post
Kremlin alarmed by report on planned US cyberattack on Russia — Al JazeeraOriginal Article

Previous Commentaries, Analysis, And Editorials — March 9, 2021
Next Big Cuts Are Expected In The U.K. Military