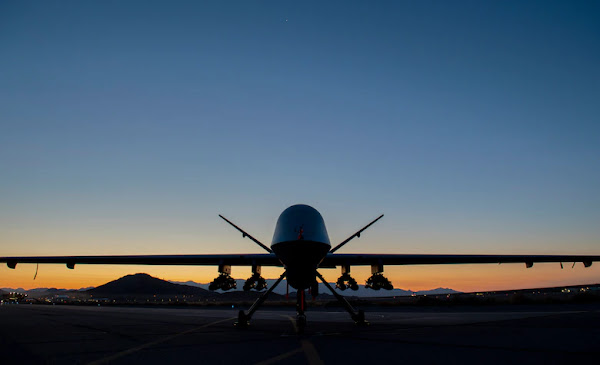 An MQ-9 Reaper armed with eight Hellfire missiles sits on the flight line at Creech Air Force Base, Nev., on Sept. 10, 2020. Photo: Haley Stevens/U.S Air Force
US News and World Report: Pentagon Confirms Biden’s New Restrictions on Drone Strikes, Commando Raids
President Joe Biden’s review into the military and spy agencies’ clandestine warfare shows how unwieldy the rules governing shadow warfare against violent extremist groups have become.
THE PENTAGON ON MONDAY confirmed President Joe Biden has imposed new rules on how the military and intelligence services can conduct drone strikes and commando raids in some conflict zones, restoring the kind of White House control over that decision-making process that President Donald Trump attempted to dismantle.
Defense Department spokesman John Kirby said the new rules represent "interim guidance" that was issued "to ensure the president has full visibility on proposed, significant actions, which the National Security Council will review."
That such a review is necessary serves as an indication for how unwieldy and unclear the rules governing America's shadow wars have become in recent years.
Read more ….
Previous Post: New York Times: U.S. Military And The C.I.A. Must Now Obtain White House Permission To Attack Terrorism Suspects Away From War Zones (March 6, 2021).
WNU Editor: These new restrictions are actually the same old restrictions that the Obama administration had in place when it came to drone strikes and raids by special services. Everything must be first cleared by the White House. It was also a policy that many in the Pentagon and intelligence community were frustrated with. The decision to launch such attacks usually took too long to filter up the chain of command for it to be acted upon.
Bottom line. We are now back to the era of having intelligence and military operations being micromanaged by the White House. The big question that remains unanswered is …. who will be micromanaging these decisions? President Obama always made sure that he was in the loop. But I have doubts that it will be President Biden. He does not even remember the name of his Secretary of Defense …. President Biden Forgets The Name Of His Secretary Of Defense, Lloyd Austin (March 8, 2021). So who will be responsible for making these major decisions?Original Article

Previous Kremlin Warns The U.S. Not To Launch Cyberstrikes On Russia
Next U.N. Nuclear Watchdog Says Iran Is Increasing Its Capacity To Enrich Uranium