zekal3_3 2021-03-10 Fashion, Life & Love Comments Off on Public Backlash In Britain At the Harry And Megan Interview With Oprah 31 Views 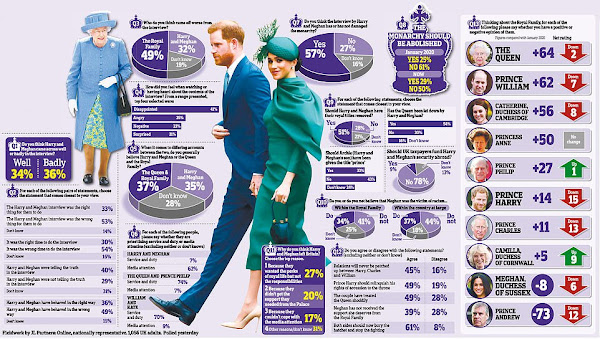 (Click on Image to Enlarge) More than half of people surveyed believe Harry and Meghan's interview with Oprah Winfrey was the wrong thing to do, while only a fifth believe the couple left Britain because they didn't receive enough support from the Palace
Daily Mail: EXCLUSIVE: Mail survey reveals public fury at the Sussexes as majority call for Harry and Meghan to be stripped of titles, believe they said the 'wrong thing at the wrong time', do not deserve to be funded… and have damaged reputation of entire Royal Family
* Survey reveals the damaging impact Meghan and Harry's interview has had on opinions of the Royal Family * Poll showed most people who watched interview disbelieved Meghan's claims of racism from family member * Most felt the couple prioritized media attention over their duty – though there was a split between age groups
Most Britons think the Duke and Duchess of Sussex were wrong to have given their explosive interview, a poll reveals today.
A majority of the public believes they have let down the Queen – and should be stripped of their royal titles. The survey was conducted after millions watched the bombshell Oprah Winfrey interview on ITV on Monday.
Read more ….
WNU Editor: This sums up my point of view …. Meghan Markle Inspires Millions Of Young Girls With Message That No Matter How Famous, Rich, And Powerful They Are, They Will Always Be Oppressed (Babylon Bee).Original Article