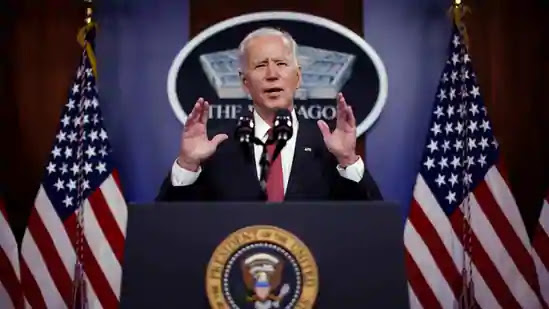 US President Joe Biden delivers remarks to Defense Department personnel during a visit to the Pentagon in Arlington, Virginia, US on February 10, 2021.(Reuters Photo)
Defense News: Research, procurement could get squeezed in Biden budget
WASHINGTON — Defense spending experts are suggesting procurement and research spending could take a hit in what is expected to be an effectively flat defense budget for fiscal year 2022.
Reports this week peg the Pentagon’s share of the overall defense budget in the range of $704-$708 billion. That’s in line with the $705 billion the department received as part of the fiscal year 2021, but department officials have claimed anything less than 3-5 percent growth annually amounts to a cut due to inflation.
“If this is the number that’s included in the budget request, we would view it as positive because the Biden Admin would be signaling to Congress that it doesn’t want cuts in defense,” analyst Roman Schweizer of Cowen wrote in a letter to subscribers.
Read more ….
WNU Editor: I do not know where these experts are getting their information. The Biden administration has made it very clear that defense spending is not their priority. Their priority is on Covid-19 relief, and pursuing an economic and social agenda that they were elected on. My prediction. I expect real defense cuts (before inflation) in the next budget request.Original Article