The F-35 Program Reveals What Is Wrong With The Pentagon 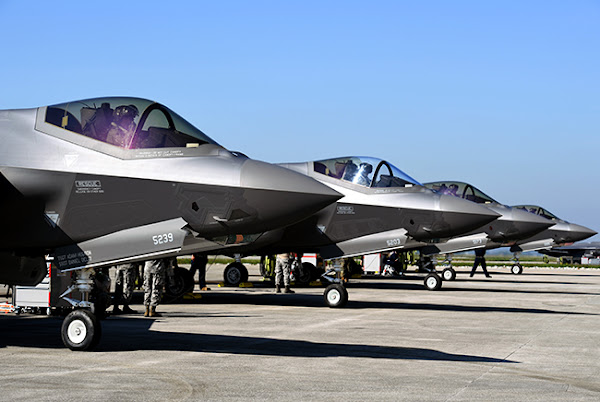 F-35A Lightning IIs from the 388th and 419th Fighter Wings, at Hill AFB, Utah, prepare for takeoff at Aviano AB, Italy, on May 31, 2019. Air Force photo by A1C Caleb House.
Sean McFate, The Hill: The F-35 tells everything that's broken in the Pentagon
It’s official: The F-35 Joint Strike Fighter is a “rathole” of taxpayer money, something defense experts already knew — at least those without dubious ties to the military industrial blob. Now the House Armed Services Committee chairman has joined the ranks of the outraged, saying that when he thinks about the F-35, he thinks about “failure on a massive freaking scale.”
The F-35 is an allegory for everything that’s broken in our Department of Defense, which receives more money than the rest of the federal interagency, combined. In fact, we spend more on our armed forces than the next 10 biggest militaries in the world, combined. What are we getting for our tax dollars? Unfortunately, the F-35.
Read more ….
WNU Editor: The F-35 is not the only program that illustrates problems in the Pentagon. The Navy's LCS and its new aircraft carrier program are others.Original Article