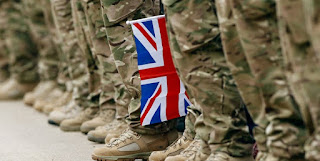 Bloomberg: Chemical or Dirty Bomb Terror Attack Likely by 2030
The world is likely to suffer a successful chemical, biological or so-called dirty bomb attack by terrorists over the next 10 years, the U.K. has warned, as Prime Minister Boris Johnson set out plans to overhaul British defense and foreign policy.
Under a blueprint for the next decade, the U.K. will cut tanks and some fighter jets, while bolstering its arsenal of nuclear missiles potentially by more than 40%.
The plans are contained in a 100-page report which Johnson’s officials are billing as the most wide ranging re-evaluation of the U.K.’s security and place in the world since the end of the Cold War.
In it, the government warns the country is under threat from rogue states, terrorists and even big tech companies, arguing that British military capabilities and international strategies must be reshaped in response.
Read more ….
Update: 'Nuclear' terror attack could hit within 9 YEARS – Boris warns of stark reality facing UK (Daily Express)
WNU Editor: From the UK review on who may launch such an attack ….
…. “The main sources of terrorist threat are from Islamist and Northern Ireland-related terrorism and far-right, far-left, anarchist and single-issue terrorism,” the report says. “It is likely that a terrorist group will launch a successful CBRN attack by 2030.” CBRN is an abbreviation for chemical, biological, radiological and nuclear.
Here are more key points in Johnson’s defense plan:
* The limit in the number of nuclear warheads the U.K. maintains will rise to 260 from 180 * The British army is to reduce by 10,000 personnel and lose 77 tanks and 760 Lockheed Martin Warrior fighting vehicles * The Royal Air Force will lose 24 Eurofighter Typhoon jets, its 13 strong fleet of Lockheed’s Hercules transport planes and Queen Elizabeth II’s four remaining VIP jets * The Navy will lose two specialist sub-hunting frigates well as its 13-strong fleet of minehunters which are due to be replaced by drones * Plans to develop the next generation of naval vessels, including Type 32 frigates, and to build warships in Scotland will go ahead while at least 48 Lockheed Martin F-35 combat aircraft will be added by 2025. * Work on developing the Future Combat Air System for the RAF and delivering upgraded Typhoon radars will also continue * Military bases will be revamped in Kenya, Oman, Singapore, Cyprus, Gibraltar and Germany so forces can respond more quickly – with a focus on the Indo-Pacific regionOriginal Article