Gallup Poll: More Americans Than Ever View China As The Greatest Enemy

zekal3_3 4 weeks ago Fashion, Life & Love Comments Off on Gallup Poll: More Americans Than Ever View China As The Greatest Enemy 17 Views 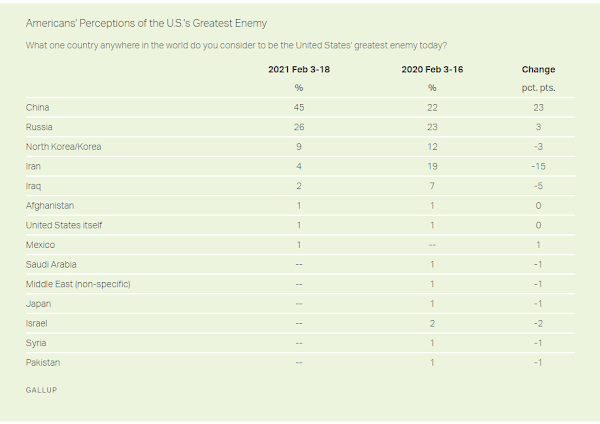 Gallup: New High in Perceptions of China as U.S.'s Greatest Enemy
* China now seen as U.S.'s greatest enemy * Half of Americans believe China is world's leading economic power * Record 63% say economic power of China is critical threat to U.S.
WASHINGTON, D.C. — Forty-five percent of Americans now say China is the greatest enemy of the U.S., more than double the percentage who said so in 2020. That year, Americans were equally as likely to say either China or Russia was the U.S.'s greatest enemy. The current shift coincided with a period when the global economy and human activity were severely impacted by the coronavirus pandemic, which originated in China.
The Feb. 3-18 poll also finds favorable views of China among U.S. adults falling for the second straight year, putting the figure at a historically low 20%.
Read more ….
WNU Editor: I am surprised that only 45% see China as the greatest enemy (I expected a much higher number). I am not surprised that 50% of Americans see China as the dominant economic power in the world today, and 63% see China as an economic threat.
My prediction is that these numbers are going to go higher.
One more big surprise in this poll. Americans do not see Iran as a threat (only 4%).Original Article

Previous US Intelligence Says Russia Attempted To Interfere In The 2020 Presidential Election
Next Commentaries, Analysis, And Editorials — March 16, 2021