zekal3_3 2021-03-19 Fashion, Life & Love Comments Off on More Questions Over President Biden’s Health As He Tripped And Stumbled Three Times While Boarding Air Force One 25 Views


Daily Mail: New questions over Biden's health as the president, 78, stumbles multiple times up the stairs of Air Force One before falling down: Recovers to give a salute before flying to Atlanta
* President Biden fell as he climbed up the stairs of Air Force One on Friday morning at Joint Base Andrews * The President stumbled multiple times, clinging on to the railing, then he fell to his knees * He got back up and carried on climbing before giving a salute at the top then vanishing into the aircraft * Biden has long faced questions over his health; he regularly mixes up names and titles * On Thursday, he referred to Vice President Kamala Harris as 'President Harris' * The fall is the latest in a string of incidents which raise concerns over the President's health and ability to lead * It also comes at a moment of heightened tensions between the US, Russia and NA * Until recently, the President was walking in a boot after breaking his foot while playing with his dog Major * Biden, 78, is the oldest President in history; Ronald Reagan was 77 when he left office and he was 69 when he was elected * Trump was 70 when elected and was 74 when he left office earlier this year
President Joe Biden stumbled multiple times then fell to his knees as he climbed the steps of Air Force One on Friday in the latest of a string of incidents which raise concerns over his health.
Biden, 78, was boarding the aircraft at Joint Base Andrews just before noon for a flight to Atlanta when he stumbled. He gripped on to the railing, steadied himself and kept going but lost his footing a second time and then a third.
On the third trip, he fell to his knees.
He got back up then carried on up the stairs before giving a salute at the top then disappearing into the aircraft. Once on the plane, White House Deputy Press Secretary Karine Jean-Pierre told reporters that he was '100 percent fine' and was preparing for his trip in Atlanta.
Read more ….
WNU Editor: Thank god he is OK. But what surprised me is that no one rushed to help him. I guess his entourage were caught off-guard. And all of this happening one day after Russian President Putin made a remark on President Biden's health.
The White House has responded …. White House says Biden is '100% fine' after he tripped boarding Air Force One (CNN). More here …. Biden '100 percent' fine after stumble on Air Force One steps, aide says (The Hill).
What's my take. Slipping and falling in his bathroom two months ago. And now this. And this is what we know. Have there been other events? Will a reporter ask this question?
My biggest fear with my mother who is suffering from dementia is falling. It is one of the sad consequences for those who suffer from cognitive decline. And going up the stairs is the easy part. The danger is when they go down the stairs.
More News On President Biden's Tripping On The Stairs Of Air Force One
White House says Biden doing fine after stumbling while boarding Air Force One — Reuters
Biden stumbles multiple times, falls as he scales Air Force One stairs — FOX News
Biden keeps falling up the stairs as he boards Air Force One — NYPost
Biden trips three times while boarding Air Force One — New York Daily News
Biden Falls Three Times Walking Up Steps to Air Force One — NR
Update: Speaking of going down stairs. Did some checking. First Lady Jill Biden is usually beside the President and holding him or his hand when they are going down stairs (see below). I know that they are a very affectionate couple. But is this also to steady him and prevent him from falling? 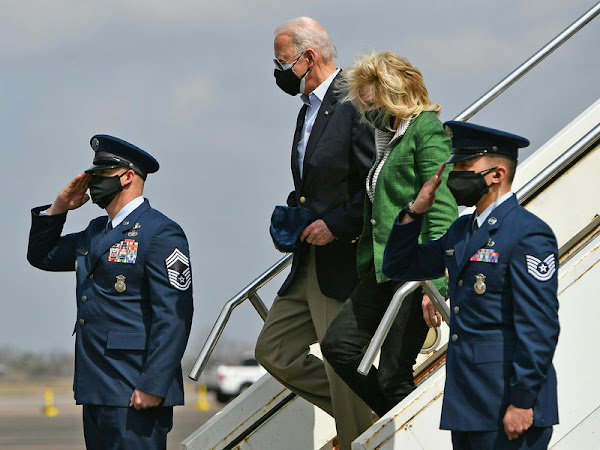 President Biden and first lady Jill Biden step off Air Force One at Ellington Field Joint Reserve Base in Houston, where he is scheduled to speak Friday night at a vaccination site at NRG Stadium.Original Article

Previous Air Force Is Worried That The U.S Will Not Field A Sixth-Generation Future Fighter In Time To Face China (Update)
Next Kremlin Says It Wants To Save U.S. – Russia Ties