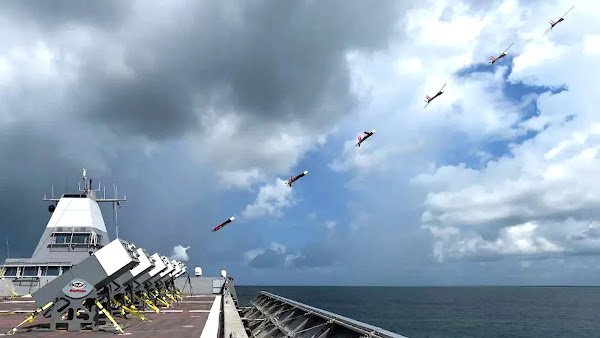 A graphic depicting the sequence of a Coyote Block 1 drone deploying from a launcher on a ship. Raytheon
Warzone/The Drive: Pentagon Unveils Details On Effort To Equip Its Services With Massive Swarms Of Deadly Drones
The Pentagon has quietly laid critical groundwork for fielding weaponized swarms of drones across all of the services.
The Pentagon has announced that one of its offices has completed planned research and development work on a number of unmanned swarming technologies and has now turned them over to the U.S. Air Force, Army, Navy, and Marine Corps to support various follow-on programs. The systems in question are the Block 3 version of Raytheon's Coyote unmanned aircraft and an associated launcher, a jam-resistant datalink, and a software package to enable the aforementioned drones to operate as an autonomous swarm. These developments give us a glimpse into what has been a fairly opaque, integrated development effort to field lower-end swarming drones across the services that leverages common components.
Read more ….
WNU Editor: Regular readers of this blog know that drone swarms are the future.Original Article