The Last Special Forces Fighting The Forever War In Afghanistan 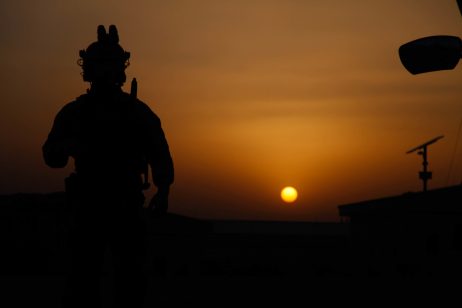 A U.S. Special Forces Soldier, attached to Special Operations Task Force-Afghanistan, waits for nightfall prior to starting a nighttime operation in the Alingar district, Laghman province, Afghanistan, Sept. 5, 2016. Credit: U.S. Army photo by Sgt. Connor Mendez/Reviewed
The Diplomat: Eagle Down: The Last Special Forces Fighting the Forever War
An interview with Jessica Donati.
In 2015, the United States’s longest war was supposed to be ending. The administration of President Barack Obama had celebrated the shift of the U.S. mission in Afghanistan from combat to training, charting a course out of the war. But combat didn’t end for U.S. Special Forces still in the country, working to back up their Afghan counterparts but with fewer resources.
In “Eagle Down,” Jessica Donati takes us to Afghanistan in 2015, following the last U.S. Special Forces fighting “the forever war.” Donati, who covers foreign affairs and national security for The Wall Street Journal, headed the paper’s Kabul bureau in 2015 and her book covers the period from 2015 to 2020. “Eagle Down” weaves a narrative from two threads: the personal experiences of soldiers in Afghanistan trying to do the mission and come home alive, and the efforts of policymakers in Washington to extract the United States from a domestically unpopular conflict without generating too much noise.
Read more ….
WNU Editor: A sobering interview with Jessica Donati on the Afghan war and the role of US Special Forces.Original Article

Previous U.S. Defense Secretary Austin Tells North Korea That The US Is Ready To ‘Fight Tonight’
Next NBC Report: Biden Administration Considering 6-Month Extension For US troops In Afghanistan