The Pandemic Has Crushed The World’s Middle To Upper Class 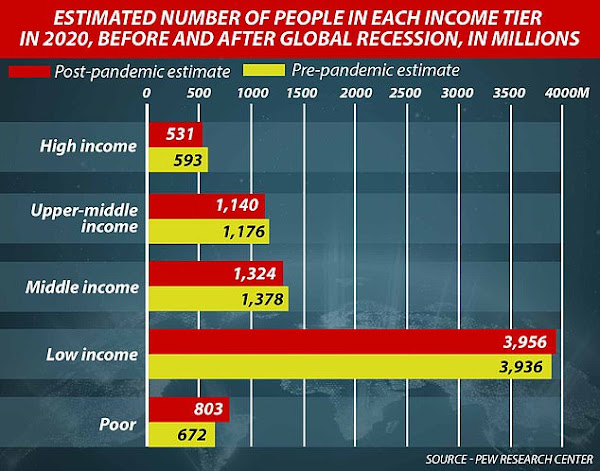 Pictured: A graph showing the estimated number of people in each income tier in 2020, before and after the global recession caused by the coronavirus pandemic
Daily Mail: Coronavirus caused world’s middle class ‘to shrink for the first time since 1990s’
* Global middle class fell by 90 million, according to a study released Thursday * This increased number of people considered poor, living on less than $2 per day * Shrinking middle class numbers reflect the contraction of the global economy * In January 2020, it was predicted global economy would expand by 2.5 percent * However, World Bank data suggests it actually contracted by 4.3 percent
The pandemic caused the world's middle class to shrink for the first time since the 1990s last year, according to an estimate based on World Bank data.
Another estimate showed that almost two-thirds of households in developing economies reported that they had suffered loss in income in 2020.
A study from non-partisan research group Pew Research Center, published on Thursday, found that last year the global middle class fell by 90 million people, to almost 2.5 billion.
The middle class counts as those earning $10 – $50 per day.
Read more ….
WNU Editor: So much for the media narrative that the upper class has benefitted from this pandemic. Clearly many did not.
The study from the research group Pew Research Center on this global increase in poverty is here …. The Pandemic Stalls Growth in the Global Middle Class, Pushes Poverty Up Sharply (PEW Research).Original Article

Previous Is This The U.S. Air Force’s Next Fighter Jet?
Next Russia Will React If Bosnia Takes Steps Towards Joining NATO