U.S. Defense Secretary Austin Tells North Korea That The US Is Ready To ‘Fight Tonight’ 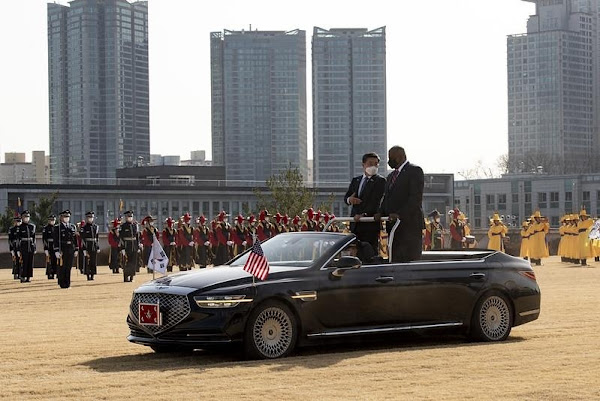 This photo downloaded from the US Indo-Pacific Command Twitter account shows South Korean Defense Minister Suh Wook (L) and his US counterpart, Lloyd Austin (R), talking while inspecting an honor guard prior to their talks at the defense ministry compound in Seoul on Wednesday. Austin arrived in Seoul earlier in the day for a three-day visit. (US Indo-Pacific Command Twitter account)
NYPost: Defense secretary Austin to North Korea: US is ready to ‘fight tonight’
Defense Secretary Lloyd Austin warned Thursday that American forces are ready to “fight tonight,” in response to North Korea slamming drills resuming between the US and South Korea.
The US and South Korean forces have resumed military drills after pausing the exercises more than a year ago over coronavirus concerns.
“Our force remains ready to ‘fight tonight,’ and we continue to make progress toward the eventual transition of wartime Operational Control to a [Republic of Korea]-commanded, future Combined Forces Command,” Austin said.
Read more ….
WNU Editor: So we are now back to issuing threats of war with North Korea. It did not take long for the Biden Administration to unravel the work that former President Trump did in lessening tensions on the Korean peninsula.
A part of me is now wondering if this is being done deliberately by the White House. Or worse …. no one is in charge.
More News On U.S. Defense Secretary Austin Telling North Korea That The US Is Ready To ‘Fight Tonight’
Biden defense secretary warns US forces ready to 'fight tonight' after North Korea warning — FOX News
KIM AND GET IT Defense secretary warns US forces ready to ‘fight tonight’ after North Korea warning — The SUN
Pentagon chief leaves S. Korea after three-day stay for security talks — Korea HeraldOriginal Article

Previous Overshoot or Omnicide?
Next The Last Special Forces Fighting The Forever War In Afghanistan