The Crisis On The U.S. – Mexican Border Continues To Get Worse

zekal3_3 4 weeks ago Fashion, Life & Love Comments Off on The Crisis On The U.S. – Mexican Border Continues To Get Worse 30 Views 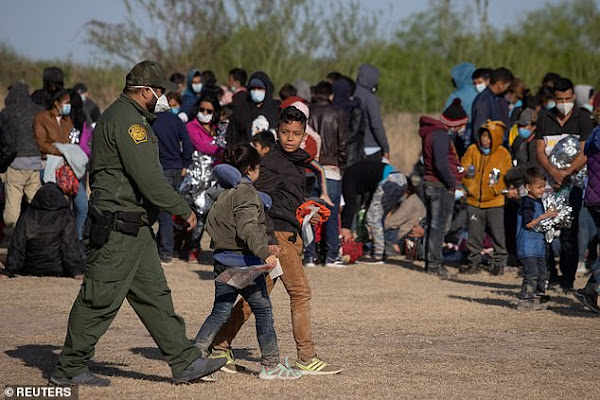 Two unaccompanied minors are escorted by a Border Patrol agent as migrants take refuge near a baseball field in La Joya, Texas after crossing the Rio Grande river
Washington Post: Biden administration considers flying migrants to states near the Canadian border for processing
A new spike in the number of families and children crossing the Rio Grande into South Texas over the past several hours is forcing U.S. Customs and Border Protection to request airplanes that will allow the Biden administration to transport migrants to states near the Canadian border for processing, according to two Department of Homeland Security officials and an email reviewed by The Washington Post.
Border officials requested the air support from U.S. Immigration and Customs Enforcement because 1,000 members of families and unaccompanied minors crossed the Rio Grande on Friday morning, and border agents have another 1,000 migrants they have been unable to process since last night, the communications show.
Read more ….
Update: Shocking moment two migrant teens DROWN trying to cross the Rio Grande: Pelosi claims the Biden administration has the border situation 'under control' while ICE considers moving migrants to the Canadian border to ease crowding (Daily Mail).
WNU Editor: This is not a crisis. This is a disaster. And it is not going to end with the message and narrative that the Biden administration are currently sending out. On the contrary. It is going to escalate in the coming months to numbers that are going to shock most Americans.
My prediction. The Biden administration are not going to stop this massive migration. If it is going to be stopped by the governments of Mexico and Central America who do not want to see their populations depopulated to levels that are not sustainable for their country to function properly.
Update #2: A sobering read …. ‘Asylum’ signs spotted welcoming migrants who cross illegally in Texas (NYPost).Original Article

Previous U.S. – China Talks Conclude In Alaska
Next Tweets Of The Day