zekal3_3 2021-03-20 Fashion, Life & Love Comments Off on This Surveillance Company Claims It Can Track Nearly Any Car In The World In Real-Time 15 Views 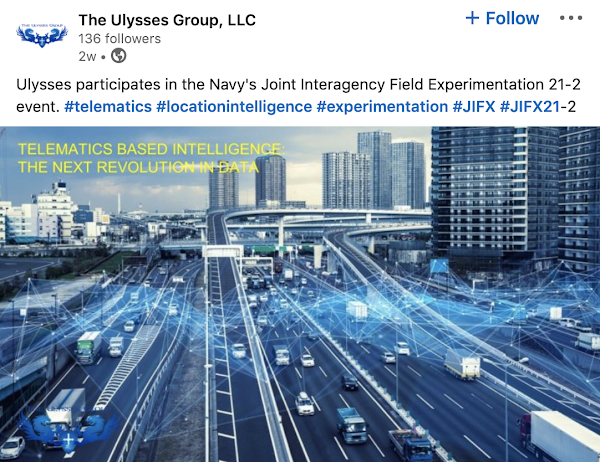 Gizmodo: This Surveillance Company Claims It Can Track Nearly Any Car in Real-Time
A defense contractor that claims to have access to motor vehicle location data on a global scale says it wants to use that data to help U.S. federal agencies conduct more efficient spying and military operations.
The Ulysses Group, which offers “cutting edge operational and intelligence services, support, and equipment” to government clients, says it can “access over 15 billion vehicle locations” worldwide every month. This data, which can be viewed “historically” or in real-time, should be used operationally by U.S. agencies, the company says.
Read more ….
WNU Editor: I guess this explains why China has banned Tesla purchases for its government and military …. Chinese military reportedly restricts use of Tesla cars among personnel (CNBC).Original Article

Previous The U.S. Air Force Says It Has A Plan To Diversify Its Pilot Corps
Next Russia Has Deployed All Six Of Its Black Sea Fleet Submarines As NATO Drills Begin In The Region