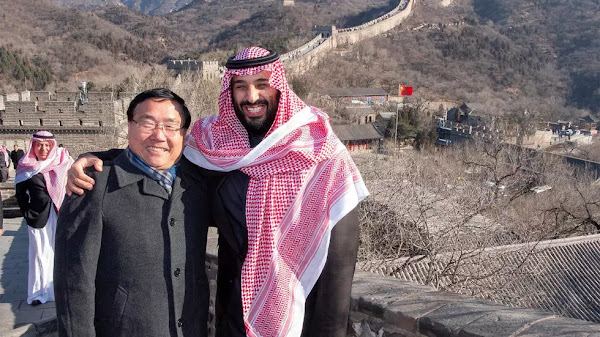 Saudi Crown Prince Mohammed bin Salman with Chinese Ambassador to Saudi Arabia Li Huaxin during a visit to the Great Wall of China on February 21, 2019. Reuters
Reuters: Saudi Aramco to prioritise energy supply to China for 50 years, says CEO
BEIJING (Reuters) – Saudi Aramco will ensure China’s energy security remains its highest priority for the next 50 years and beyond as new and existing energy sources run in parallel for some time, CEO Amin Nasser told the China Development Forum on Sunday.
Saudi Arabia, the world’s biggest oil exporter, retained its position as China’s top supplier in the first two months this year, with volumes up 2.1% to 1.86 million barrels per day (bpd), China customs data showed on Saturday.
The kingdom beat Russia to keep its ranking as China’s top crude supplier in 2020 despite unprecedented production cuts in a pact between the Organization of the Petroleum Exporting Countries and its allies to balance global markets after demand plunged during the COVID-19 pandemic.
Read more ….
WNU Editor: Russia is still China's number one foreign supplier of natural gas. But it is oil that China wants. As for Saudi Arabia. Saudi Aramco has had a bad year, and they need to diversify and expand their customer base …. Saudi Aramco reports $49bn profit slump in 2020 (France 24).
There are no surprises here. The Chinese are a perfect fit for Saudi Arabia, and Saudi Arabia is a perfect fit for the Chinese.Original Article