Is There Anyone In Charge Of The White House? (Update) 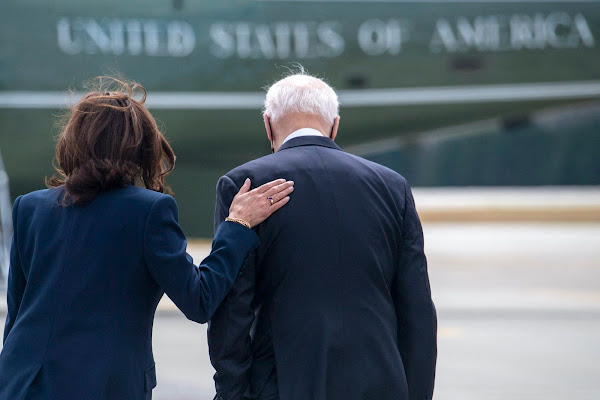 US President Joe Biden and US Vice President Kamala Harris arrive at Dobbins Air Reserve Base in Marietta, Georgia, on March 19. Photo: AFP / Eric Baradat
Spengler, Asia Times: Biden’s firing squad stands in a circle
With no one in charge, none of Washington’s recent threats is consistent with identifiable policy objectives
The Biden Administration last week set a new historical record by threatening sanctions against Germany, India, Russia and China in the space of 72 hours.
Germany and India are, or at least were, American allies. Washington is angry at Germany for building a natural gas pipeline with Russia, at India for purchasing a Russian air defense system, at Russia for mistreatment of President Putin’s opponents and at China for treatment of its Uighur Muslim minority.
None of Washington’s recent threats is consistent with identifiable policy objectives. On the contrary, recent outbursts from Biden and his cabinet will cement a Sino-Russian alliance against the US, undermine US efforts to rebuild relations with European allies and damage US efforts to create a “Quad” alliance against China in the Pacific.
Read more ….
WNU Editor: Spengler is saying what this blog has been saying for the past month, and others in the media are now starting to notice. There is no one really in charge in the White House.
Granted …. all the cabinet officials are running their departments, and the US government is doing what it is suppose to do. But overall there is no consistency, and I for one cannot identify this administration's key policy objectives.
It is almost as if each department is defining what the policy should be, and then go ahead to do it.
This lack of direction has clearly shown itself in foreign policy. In the span of two months the White House has accomplished this:
1) Canceled a key Canadian oil pipeline, threatening to cancel two other critical pipelines, and damaging U.S. – Canada trade with a buy American policy contrary to NAFTA and other trade agreements.
2) Alienating Mexico and other Central American governments with an open border policy that has sparked a massive migration crisis that is impacting every country in the region.
3) Threatening Germany with sanctions over a pipeline that is necessary for its energy security.
4) Threatening India with sanctions over a possible arms purchase from Russia.
5) Sanctions against China.
6) A war of words with Saudi Arabia coupled with a decision to ignore the Saudi Crown Prince and effective ruler of the Kingdom.
7) Alienating Israel and the Gulf states with a push to negotiate a nuclear treaty with Iran that has shown no interest to even consider it.
8) Abandoning the momentum brought about by the Abraham Accords
If this is "America back" and a new era of American diplomacy, I can easily see most countries in the coming year telling the White House to count them out.Original Article