Islamic State Fighters Are Committing Massacres Across The Sahel 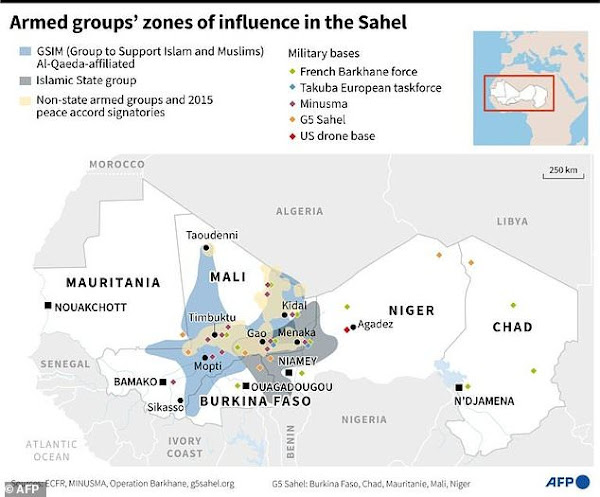 Long War Journal: Islamic State kills hundreds in massacres across the Sahel
Fighters from the Islamic State’s local wing, commonly referred to as the Islamic State in the Greater Sahara (ISGS), have reportedly perpetrated a series of recent massacres across the Sahel. Almost 300 people are believed to have been killed in these attacks.
Yesterday, militants purportedly belonging to ISGS attacked three separate villages in Niger’s Tahoua region. Estimates on the death toll have varied with the Nigerien government officially reporting at least 137 people were killed.
Local sources, however, have reported as many as 176 people were left dead by the militants. It is possible this number will continue to rise as local officials continue to search the area.
According to one local official, “armed men arrived on motorbikes and shot at everything [that] moved.”
Read more ….
WNU Editor: More news and information is here …. The Sahel: Terror, poverty and climate change (AFP).Original Article

Previous Report: Afghan President Has Rejected The U.S. Peace Plan. To Offer Election In Six Months
Next After 20 Years Of War And Spending $88 Billion, The Afghan Security Forces Are Still No Match For The Taliban