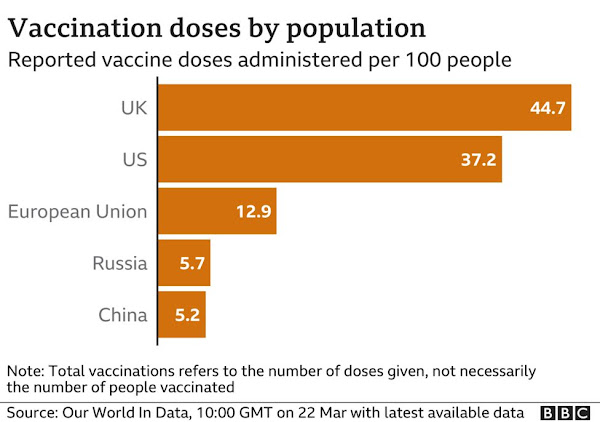 CNBC: UK and EU vaccine dispute deepens as Brussels considers new export controls
* European officials are worried that any future issues could undermine their vaccination targets. * In January, the EU approved restrictions on exports of Covid vaccines, but they can only be implemented if a company is not respecting its contractual obligations with the region and if the vaccines are heading to a country considered not vulnerable. * However, the legislation is due to expire at the end of March.
LONDON — Tensions are high between the U.K. and the European Union as the 27-member bloc considers restricting exports of Covid-19 vaccines across the English Channel.
The European Union is increasingly frustrated at AstraZeneca for not respecting its delivery targets to the bloc. The pharmaceutical firm reduced the number of vaccines it will deliver to the EU twice in the first quarter and once in the second quarter. As a result, European officials are worried that any future issues could undermine their vaccination targets.
Read more ….
Update #1: Covid vaccines: EU tussle with UK over AstraZeneca escalates (BBC) Update #2: Vaccine row heats up as EU doubles down on threat to ban AstraZeneca exports to UK (Yahoo Finance)
WNU Editor: The EU has no one to blame but themselves …. How EU sabotaged fight against Covid as ‘HALF of Germany, France and Spain now believe AstraZeneca jab is unsafe’ (The SUN).Original Article

Previous India Faces Second Wave As Covid Cases Surge To 260,000 A Week
Next Picture Of The Day