After Proposing A Ceasefire, Saudi Arabia Has Intensified Its Bombings Against The Houthis In Yemen

zekal3_3 2021-03-24 Fashion, Life & Love Comments Off on After Proposing A Ceasefire, Saudi Arabia Has Intensified Its Bombings Against The Houthis In Yemen 38 Views 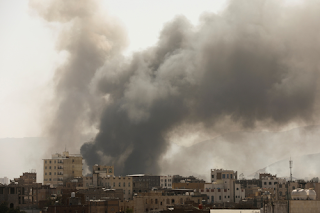 Antiwar.com: Saudi Arabia Bombs Grain Port in Yemen
The US-backed coalition has regularly targeted food infrastructure in Yemen, leading to mass starvation in the country
The US-backed Saudi-led coalition continues to launch airstrikes across Yemen. Over the past few days, Saudi bombs have hit the capital Sanaa, Maarib province, and the Red Sea port of Salif.
On Monday, the UN said the airstrikes in Salif targeted a grain port and hit a warehouse and the living quarters of a food production company. “Local authorities and company management stated that six injured workers were transferred to local medical facilities for treatment,” the UN mission in Hodeidah, Yemen, said in a statement.
Read more ….
WNU Editor: I doubt that this is going to last long. …. Saudi offers to allow fuel ships in Yemen peace proposal, after CNN investigation exposes toll of blockade (CNN).Original Article

Previous U.S. RC-135 Spy Plane Sets Record With Close Flight Off The Chinese Coastline
Next Beijing Warns Five Eyes That An ‘Irritated’ China Would Be ‘Difficult To Handle’