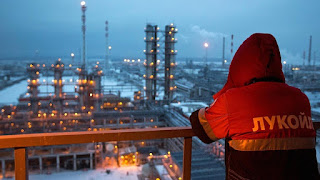 OilPrice.com: The U.S. Imports Record Share Of Russian Oil Despite Tensions
U.S. refiners have turned to Russian oil and petroleum products to fill the gap that sanctioned Venezuelan crude and drastically reduced OPEC shipments have left in U.S. imports, despite the energy standoff between the United States and Russia.
In 2020, the U.S. imported more oil and refined products from Russian than from Saudi Arabia, with Russia’s share of American oil exports at a record-high 7 percent, Bloomberg News has estimated based on customs and EIA data.
Russia mostly displaced the market previously held by Venezuela—now unable to sell its heavy oil to U.S. refiners because of the American sanctions on Nicolas Maduro’s regime.
Read more ….
WNU Editor: On the one hand the US is telling Germany to stop importing natural gas from Russia …. U.S. Warns Germany That It Will Face Sanctions If They Continue To Build The Nord Stream II Pipeline With Russia. But on the other hand the U.S. is importing oil from Russia. You just cannot make this stuff up.Original Article