U.S. President Biden Has Yet To Have A Telephone Conversation With Ukraine President Zelensky

zekal3_3 3 weeks ago Fashion, Life & Love Comments Off on U.S. President Biden Has Yet To Have A Telephone Conversation With Ukraine President Zelensky 22 Views 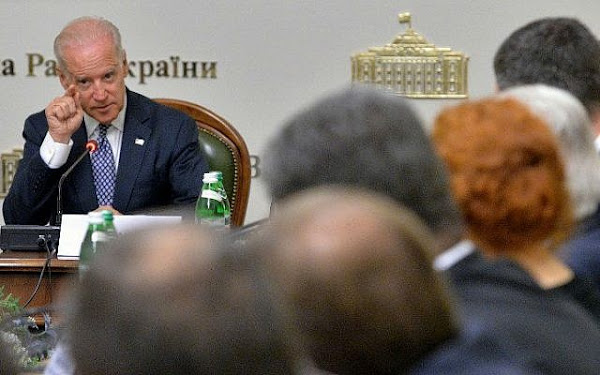 US Vice President Joe Biden addresses to members of the Ukrainian parliament during a meeting on April 22, 21014 in Kiev. (photo credit: AFP PHOTO/POOL/Sergei Supinsky)
J. Hawk, SouthFront: Ukraine Between Biden And A Hard Place
Joe Biden’s extensive interest in Ukraine during his tenure as Obama’s vice president meant that US attention toward the country would be instantly elevated in the eyes of the new administration.
The Burisma scandal which implicated Hunter Biden and which became a problem for Joe Biden on the campaign trail, combined with Biden’s own apparent frailty and avoidance of extensive public engagements, have meant that Biden is yet to have a telephone conversation with Zelensky.
Read more ….
WNU editor: In all fairness. The Ukraine President is more focused on another Covid wave that is wrecking the country than having a phone call with President Biden. But the Biden administration probably also wants to minimize the President's contact with President Zelensky in view of the history between President Biden and Ukraine, his son and the Burisma scandal, and the current political turmoil within Ukraine itself.
As for the above SouthFront's post on Ukraine. My friends and family in Ukraine are saying the same thing. Especially the reluctance of the Ukraine government and the military to launch a new military campaign in eastern Ukraine, the low morale of the Ukraine military, and the fall in the polls for Ukraine President Zelensky in not delivering on his promise to end the conflict in the east.
Update: I agree with this analysis …. No, Russia and Ukraine Are Not About to Come to Blows (Ekaterina Zolotova, GPF).
Update #2: This Politico post on the Biden administration and Ukraine makes me want to puke …. Biden keeping Ukraine at arm's-length (Politico). The Politico talks about Biden’s anti-corruption initiatives in Ukraine … cough cough …. the people I know in Ukraine have a different take. They see President Biden as someone who helped and prospered in this corruption, with his son being a major beneficiary. And that …. bottom line …. is why U.S. – Ukraine relations under the Biden administration are going to be a problem.Original Article