Multiple U.S. Destroyers Were Swarmed By Mysterious ‘Drones’ Off The California Over Numerous Nights In 2019

zekal3_3 4 weeks ago Fashion, Life & Love Comments Off on Multiple U.S. Destroyers Were Swarmed By Mysterious ‘Drones’ Off The California Over Numerous Nights In 2019 25 Views 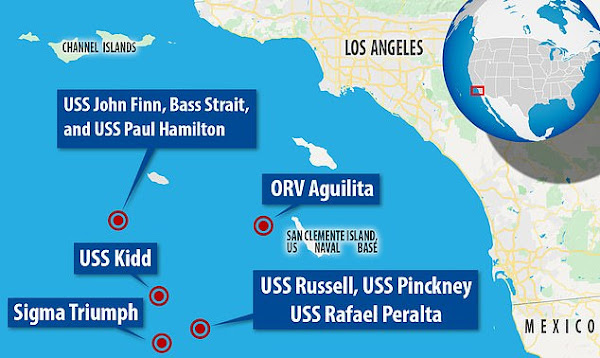 USS destroyers on patrol in July 2019 were suddenly swarmed by flashing, tic-toc shaped drones, which were able to travel long distance at high speeds
Daily Mail: Swarms of flashing 'Tic-Tac shaped' UFOs chased four US Navy destroyers off California coast at 45 mph and hovered above them at night for WEEKS, ship logs reveal
* Mysterious drones chased and harried four US Naval destroyers for up to 100 nautical miles just off the coast of California * The drones, or UAVs, were able to travel long distances at high speeds with extreme maneuverability * Seamen onboard the destroyers reported seeing multiple drones, and flashing red and white lights * A UFO spotter said the drones were 'tic-tac' shaped * The head of the navy and the FBI were involved in investigation, but it was hushed up by Naval intelligence * The area is home to a large US Naval Base on Sam Clemente Island, and in the same area as another infamous UFO sighting in 2004 US Navy warships stationed off the coast of Los Angeles encountered swarms of mysterious drones, which pursued them at high speed in low visibility – prompting a high level investigation and some head scratching among top military brass.
The series of encounters with suspected UAVs, or unmanned aerial vehicles, in July 2019, saw as many as six mystery aircraft swarm several US Navy warships close to a sensitive training area at the Channel Islands, according to The Drive.
Based on deck log data from four US destroyers targeted in the series of encounters, The Drive worked out that the drones flew at speeds of up to 45 miles an hour and traveled at least 100 nautical miles – far exceeding the capabilities of any commercially-available unmanned aircraft.
Read more ….
More News On Multiple U.S. Destroyers Being Swarmed By Mysterious 'Drones' Off The California Over Numerous Nights In 2019
Multiple Destroyers Were Swarmed By Mysterious 'Drones' Off California Over Numerous Nights — Warzone/The Drive
Mystery drones hovered over Navy destroyers off California, report says — NBC
Mystery Drones Kept Buzzing U.S. Destroyers During Exercises Off California — ForbesOriginal Article

Previous Tweets Of The Day
Next Gallup: 42 Million Want to Migrate To The U.S. From Latin America And The Caribbean