President Biden Will Have His First News Conference In The East Room Of The White House At 1:15 p.m. Eastern Time 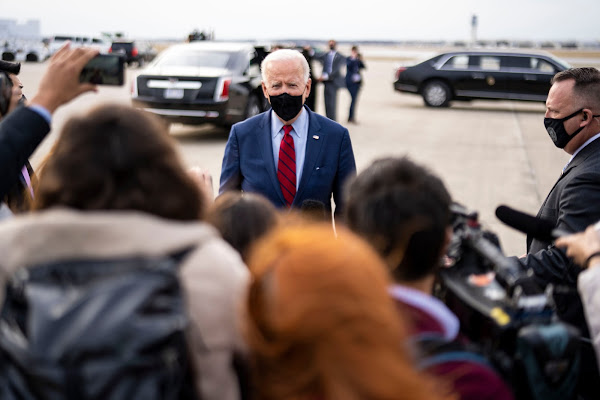 President Biden speaking to news outlets last week in Ohio. He will face reporters in his first formal news conference Thursday afternoon.Credit…Doug Mills/The New York Times
New York Times: Live Updates: 5 Issues to Watch For at Biden’s First News Conference
Until now, reporters have had only limited opportunities to directly interrogate President Biden. He is expected to face questions about topics including gun control, border policy, trillions of dollars in spending and the pandemic.
President Biden will face reporters in his first formal news conference Thursday afternoon, using the stately backdrop of the White House to promote the benefits of his economic recovery efforts, call for action on gun control and respond to criticism about his handling of the border with Mexico.
It will be Mr. Biden’s first high-stakes grilling by reporters since taking office more than two months ago. Since then, his advisers have carefully controlled his interactions with the press, which have included one-on-one interviews and some limited opportunities for reporters to ask questions during brief appearances.
Read more ….
WNU Editor: I do not expect any surprises in today's news conference. It will be a friendly and deferential media crowd.
President Biden probably already has his list of reporters to point out to ask questions, and who to avoid.
He may even know some of the questions already.
And I doubt that he will be challenged.
There is also going to be a lot of Trump bashing and blaming.
I also expect this news conference will not last long.
As for this news conference being held early afternoon. I am not surprised by that either.
People who suffer from cognitive decline are at not their best later in the day or evening. They are at their best in the morning and early afternoon. (I know from experience because my own mother is suffering from cognitive decline)
The news conference will be in the East Room of the White House at 1:15 p.m. Eastern timeOriginal Article