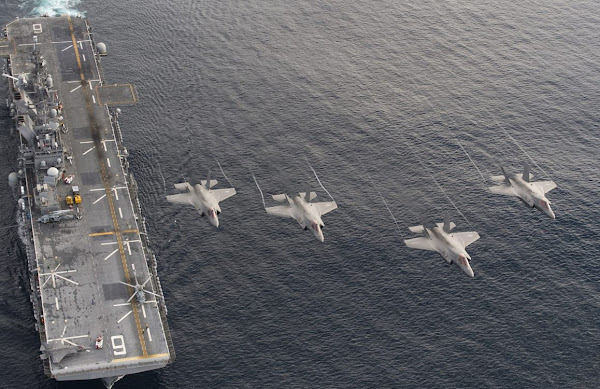 Four F-35B Lightning II aircraft perform a flyover above the amphibious assault ship USS America (LHA 6) during the Lightning Carrier Proof of Concept Demonstration. (U.S. Navy photo by Andy Wolfe/Released)
SandBoxx: Carrier Woes: The Navy's Fighters Can't Reach China
After nearly two decades of counter-terror operations around the world, the United States military has recently begun shifting its focus away from this form of asymmetric warfare and back toward the potential for near-peer conflicts with nations like China or Russia.
Despite maintaining the most powerful military apparatus on the globe, this pivot won’t be without its challenges.
Over the past 19 years, the United States military has funneled the majority of its funding into combat operations and new technologies that support the counter-terrorism endeavor.
During this time, national opponents like China have had ample opportunity to observe the way America’s military operates, and find cost-effective methods of countering the U.S.’ most significant strengths.
Read more ….
WNU Editor: The US Navy should look at what Taiwan is doing …. Taiwan Says It Is Now Making Long-Range Missile Capable Of Striking China. Build and deploy missiles to hit targets that your fighters cannot reach.Original Article