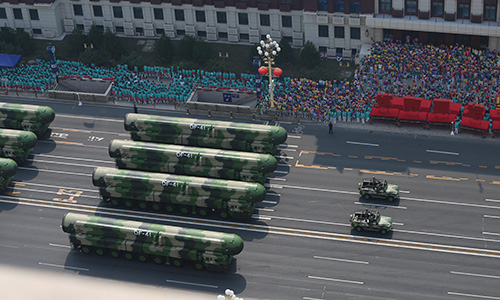 China reveals its most advanced nuclear-armed intercontinental ballistic missile, the DF-41, at the National Day parade in Beijing on October 1, 2019. Photo: Fan Lingzhi/GT
NBC: China's growing firepower casts doubt on whether U.S. could defend Taiwan
In war games, China often wins, and U.S. warships and aircraft are kept at bay.
WASHINGTON — China's massive arms buildup has raised doubts about America's ability to defend Taiwan if a war broke out, reflecting a shifting balance of power in the Pacific where American forces once dominated, U.S. officials and experts say.
In simulated combat in which China attempts to invade Taiwan, the results are sobering and the United States often loses, said David Ochmanek, a former senior Defense Department official who helps run war games for the Pentagon at the RAND Corp. think tank.
In tabletop exercises with America as the "blue team" facing off against a "red team" resembling China, Taiwan's air force is wiped out within minutes, U.S. air bases across the Pacific come under attack, and American warships and aircraft are held at bay by the long reach of China's vast missile arsenal, he said.
Read more ….
WNU Editor: China has made huge investments in its missile arsenal. This is their firepower and one that China has a huge advantage. In the event of a major war it is a given that China will be launching scores of these missiles at each major military target, probably destroying and/or severely damaging each of them in less than an hour.Original Article

Previous Will The Biden Administration Tax Drivers By The Mile To Fund Their $3 Trillion Green Infrastructure Plan?
Next Pentagon To Conduct War Game Simulations This Summer As Concerns About Threats Posed By China And Russia Increase